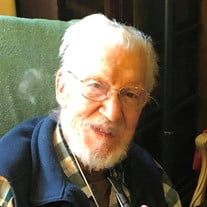 INDIANAPOLIS – William Clayton Pease, age 98, of Indianapolis, passed away Tuesday, June 7, 2022 at his home. He was born in Indianapolis on March 24, 1924 to Lela Belle (Esmon) and William Earnest Pease. He graduated from Arsenal Technical High School, where he was a top basketball player. William received his bachelor’s degree in business from Butler University. He served as a Sergeant in the United States Air Force from 1943 to 1946. During his time in the military, he earned the American Theater Ribbon, the Good Conduct Medal, and the WWII Victory Medal. On June 7, 1948, William married Susan Martha Singleton in Rushville. He worked for RCA Records in Indianapolis as a Foreman for 30 years. William was a member of the American Legion and a former member of the Immanuel United Methodist Church, where he served as a trustee and treasurer. In his free time, William enjoyed playing golf and euchre. He loved going fishing and always looked forward to the Thanksgiving Day tradition of hunting with his brothers. William is survived by his children, William A. Pease (Cheryl), Melinda Pease Rumschlag, and Jeffrey B. Pease; and grandchildren, Amy, Jessa, Christopher, Colin and Jillian. He was preceded in death by his parents, Lela and William Pease; wife, Susan Pease; and siblings, Louis Pease, Alfred Pease, and Phyllis Truemper. Visitation will be held on Friday, June 10, 2022, from 4:00 p.m. until 6:00 p.m. at Erlewein Mortuary & Crematory, 1484 W. US Hwy. 40, Greenfield, IN 46140. A funeral service will begin at 6:00 p.m. In lieu of flowers, memorial contributions may be made by mail to American Legion Veterans and Children Foundation, P.O. Box 1055, Indianapolis, IN 46206, or envelopes will be available at the mortuary. Friends may share a memory or condolence at www.erleweinmortuary.com.

INDIANAPOLIS &#8211; William Clayton Pease, age 98, of Indianapolis, passed away Tuesday, June 7, 2022 at his home. He was born in Indianapolis on March 24, 1924 to Lela Belle (Esmon) and William Earnest Pease. He graduated from Arsenal Technical... View Obituary & Service Information

The family of William Pease created this Life Tributes page to make it easy to share your memories.