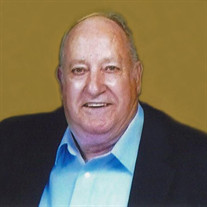 INDIANAPOLIS – William “Bill” Pierson, age 82, of Indianapolis, passed away peacefully at home on Wednesday, August 4, 2021. He was born in Beech Grove on March 16, 1939 to Clinton E. and Ruth E. (McFadden) Pierson. Bill graduated from Warren Central in 1957. He married Virginia “Ginny” (Whittington) on December 18, 1970 in Greenfield. He worked for Navistar as a machine operator for 31 years before retiring. Bill was an active member of Local UAW 98, where he was the financial secretary for 12 years. He was a member of Local Moose Lodge in Beech Grove and a lifetime member of VFW #2693 in Greenfield. He was a part of the Steve Jeffris Fan Club. Bill is survived by his children, Douglas G. Pierson of Beech Grove, Linda K. (William) Dreibelbis of Beech Grove and Sandra L. (Bryan) Martin of Fairland; stepchildren, Shirley Smith, Marilyn Radcliff, John (Cindy) Long, and Jennifer (Brian) Inman; step daughters-in-law, Marilyn Long and Candy Long; 21 grandchildren; 43 great-grandchildren; 23 great great-grandchildren; brother, Clinton T. Pierson of Indianapolis; and a sister, Agnes M. Bigelow of Fairland. He was preceded in death by his parents, Clinton and Ruth Pierson; wife, Ginny Pierson; step-sons, James A. “Jim” Long and G. Philip Long. Visitation will be held on Tuesday, August 10, 2021, from 4:00 p.m. until 8:00 p.m. at Erlewein Mortuary & Crematory, 1484 W. US Hwy. 40, Greenfield, IN 46140. A funeral service will be held on Wednesday, August 11, 2021, at 11:00 a.m. at the mortuary. Burial will follow at Orchard Hill Cemetery in Wanamaker. Memorial contributions may be made by mail to American Cancer Society, ATTN: Relay For Life of Southeast Indy - SK #NS5WW9, PO Box 681405, Indianapolis, IN 46268, or envelopes will be available at the mortuary. Friends may share a memory or condolence at www.erleweinmortuary.com.

The family of William "Bill" Pierson created this Life Tributes page to make it easy to share your memories.