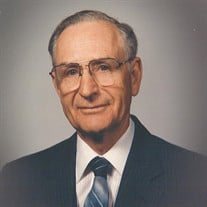 INDIANAPOLIS - Walter R. Giffin, born in Knox County, Ohio on August 10, 1918, to John W. and Clara E. Giffin, died peacefully on August 28, 2018 at his residence in Indianapolis, IN. Having lived a rich, full life, he enjoyed celebrating his 100th birthday surrounded, as he often was, by friends and family. Walter married Grace Robertson February 15, 1941, in Mount Vernon, OH and, later that year entered military service, graduating from Officer Candidate School at Camp Lee, Virginia in 1942 as a Second Lieutenant in the Army Quartermaster Corps. As a Company Commanding Officer, he served in the United States and Europe during WWII. Released from active duty as a Captain in 1945, he was discharged from the Officer Reserves as a Major. Beginning in 1946, he served two terms in the elected office of Knox County Recorder. He was Vice President and Loan Officer at First Federal Savings and Loan in Mount Vernon for 5 years, then formed the Real Estate and Insurance firm of Giffin and Biggs. In 1961, he and Grace, with their three daughters, moved to Phoenix, AZ, where he was Vice President and Manager of a Savings and Loan and Servicing supervisor for a mortgage investment firm. In 1966 he began work as Assistant Treasurer for the United Christian Missionary Society, a unit of the Christian Church (Disciples of Christ), headquartered in Indianapolis, IN. After 5+ years, he then transferred to the General Office of the Church as Executive Director of Research and Administrative Secretary for the Commission on Finance. He was a member of the National Association of Business Administrators, Vice President of the Association of Statisticians of American Religious Bodies, and listed in "Who's Who in Religion in America". Retiring in 1983, he and his wife moved to Sun City, Arizona, then returned to Indianapolis in 2003. Walter was active in leadership positions for Disciples of Christ churches in Mount Vernon, Phoenix and Sun City. He is survived by daughters Gloria Ott, Janice Diane (Lee Busby) and Marcia Moore (Doug) and granddaughters Debra Ott and Katherine Moore. Visitation will be September 8, 2018 from 12:00 p.m. to 2:00 p.m., with a Memorial service following at 2:00 p.m. with Rev. Ryan Hazen officiating. Both will be held at Erlewein Mortuary, 1484 West U.S. 40, Greenfield, IN. Internment at Union Grove Cemetery in Ohio. Memorial gifts may be made to Christian Church Foundation: christianchurchfoundation.org (800) 668-8016; Honor Flight Network: honorflight.org (937)521-2400; Habitat for Humanity: habitat.org. Friends may share a memory or a condolence at www.erleweinmortuary.com.

INDIANAPOLIS - Walter R. Giffin, born in Knox County, Ohio on August 10, 1918, to John W. and Clara E. Giffin, died peacefully on August 28, 2018 at his residence in Indianapolis, IN. Having lived a rich, full life, he enjoyed celebrating his... View Obituary & Service Information

The family of Walter R. Giffin created this Life Tributes page to make it easy to share your memories.