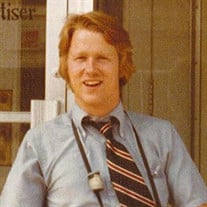 GREENFIELD - Timothy Harrison Strickland, 63, of Greenfield, passed away on Tuesday, August 7, 2018 at St. Vincent Heart Center in Indianapolis from complications following surgery. He was born on September 17, 1953 in Greenfield the son of Robert H. and Margot H. Strickland, who preceded him in death. He lived in Hancock County most of his life. He was a 1972 graduate of Greenfield-Central High School and a 1976 graduate of Indiana University, Bloomington, from which he received a bachelor’s degree in history. While a student there, he wrote for the Indiana Daily Student college newspaper. Tim was a staff writer for The Daily Reporter in Greenfield, from June 1977 until March 1981, and a staff writer for the Chronicle-Tribune in Marion from November 1981 until March 1984. After he left the newspaper business, he worked in retail book sales and was an office worker for several businesses in the Indianapolis area. At the time of his death he was retired. Survivors include two brothers, Thomas Strickland of Greenfield and Matthew Strickland of Fortville; two nephews, Adam Strickland of Greenfield and James Strickland of Indianapolis; one niece, Emily Strickland-King of Greenfield; an uncle in Michigan; and cousins in Indiana, Georgia, Michigan and New Jersey. There will be no calling or funeral services. A memorial gathering will be held on Thursday, August 16, 2018, from 4:00 p.m. until 7:00 p.m. at Erlewein Mortuary & Crematory, 1484 W. US Hwy. 40, Greenfield, IN 46140. Burial will be in Park Cemetery, Greenfield. Tim requests that memorial donations in his name be made to Amnesty International USA, 5 Penn Plaza, 16th Floor, New York, NY 10001 or Gleaners Food Bank of Indiana, 3737 Waldemere Avenue, Indianapolis, IN 46241. Friends may share a memory or a condolence at www.erleweinmortuary.com.

GREENFIELD - Timothy Harrison Strickland, 63, of Greenfield, passed away on Tuesday, August 7, 2018 at St. Vincent Heart Center in Indianapolis from complications following surgery. He was born on September 17, 1953 in Greenfield the son of... View Obituary & Service Information

The family of Timothy H. Strickland created this Life Tributes page to make it easy to share your memories.