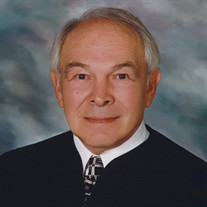 GREENFIELD – The Honorable Raymond S. Robak, age 84, of Greenfield, passed away Saturday, February 22, 2020 at Hancock Regional Hospital. He was born in Hammond, Indiana, on February 2, 1936 to Steve and Victoria (Gabor) Robak. He graduated from Bishop Noll High School in Hammond, Indiana, in 1954. He received a 4-year football scholarship to Arkansas State University and graduated in 1958. He married his high school sweetheart, Patricia S. Egan, on June 28, 1958. Immediately following college Raymond served in the US Army and left active duty in 1960 as a First Lieutenant with a Ranger Tab. He then attended law school at I.U. Indianapolis (night division) and was licensed to practice law in 1965. Mr. Robak practiced law in Hancock County from 1965-1999. He was the Hancock County Circuit Court Judge from 1999-2000 and was then appointed Senior Judge for the year 2001 and 2002. Mr. Robak was a former member of the Hancock County, Indiana State Bar Association and the American Bar Association. Raymond was also a member of St. Michael’s Catholic Church since 1965 and was an avid fisherman. He is survived by his wife, Patricia S. Robak of Greenfield; sons, Michael J. (Hattie) Robak of Minneapolis, Minnesota, and Raymond A. Robak of Las Vegas, Nevada; daughter, Margaret “Mimi” McKee of Greenfield; grandchildren, James (Julie), Sarah (Tony), and Kyle (Megan); great-grandchildren, Gavin, Sophia, Benley, Brock, Macey, and Jack; and nephew, Jeff Robak. He was preceded in death by his parents, Steve and Victoria Robak; brother and sister-in-law, Edward (Pat) Robak; son-in-law, Mick McKee; and nephew, Eddie Robak. Visitation will be held on Saturday, February 29, 2020, from 10:00 a.m. until 12:00 p.m. at St. Michael’s Catholic Church Parish Center, 519 Jefferson Blvd., Greenfield, IN 46140. A rosary will be said at 9:30 a.m. prior to visitation. A Mass of Christian burial will follow at 12:00 p.m. Father Aaron Jenkins will be officiating. Burial will follow at Park Cemetery in Greenfield. In lieu of flowers, memorial contributions may be made by mail to the St. Michael’s Catholic Church at 519 Jefferson Blvd, Greenfield, IN 46140, by website at https://www.stmichaelsgrfld.org/, or the charity of your choice, or envelopes will be available at the church. Friends may share a memory or condolence at www.erleweinmortuary.com. Arrangements are being handled by Erlewein Mortuary & Crematory in Greenfield.

The family of The Honorable Raymond S. Robak created this Life Tributes page to make it easy to share your memories.