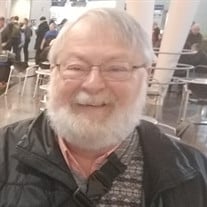 NEW PALESTINE – Ronald Lee Christman, age 72, of New Palestine, passed away on Wednesday, April 17, 2019. He was born in Scotts Bluff, Nebraska on February 17, 1947 to Ralph E. and Esther (Kembel) Christman. He graduated from Haver Montana High School in 1965 and received his bachelors degree from Minnesota Bible College in 1970. Ronald married Pam (Wilkerson) on July 20, 1969 in Indianapolis. He was a minister for over 25 years at various churches in Boones Creek, TN, Chicago, IL, Greenwood, IN, New Palestine, IN, and Fortville, IN. He had also been in sales with Meyer Material Handling in Beech Grove for over 20 years and then several years at Kid Glove in Indianapolis. Ron was a member of Park Chapel Christian Church. He had a passion for teaching about Jesus and helping others. He also liked hunting, skiing, woodworking, working with stained glass, and playing golf. He loved spending time with his family, especially his grandchildren. Ron is survived by his wife, Pam Christman of New Palestine; children, Cory (Sarah) Christman of Nottingham, England, Ryan (Kristin) Christman of Orlando, Florida, Caleb (Dawn) Christman of Columbus, Ohio, and Robyn Christman of New Palestine; nine grandchildren, Finnigan, Broderick, Julia, Zechariah, Abby, Kenna, Ezra, Rachel, and Acadia; and two sisters, Debbie Christman of Houston, TX and Diana (George) Hipple of North Platte, NE. He was preceded in death by his parents, Ralph and Esther Christman; and brother, Roger Christman. A Celebration will be held on Tuesday, April 23, 2019, at 7:00 p.m. at Park Chapel Christian Church, 1176 E. McKenzie Rd., Greenfield, IN 46140. A family and friend visitation prior to the service at 5:30 p.m.-7:00 p.m. Reverend David Woods will be officiating. In lieu of flowers, memorial contributions may be made by mail to Park Chapel Greater Things Fund, 1176 E. McKenzie Rd., Greenfield, IN 46140 or envelopes will be available at the church. Friends may also share a memory or a condolence at www.erleweinmortuary.com. Arrangements are being handled by Erlewein Mortuary & Crematory in Greenfield.

The family of Ronald Lee Christman created this Life Tributes page to make it easy to share your memories.