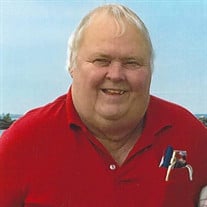 GREENFIELD – Ronald “Ron” Lee Roland, age 79, of Greenfield, passed away Sunday, June 27, 2021. He was born in Anderson on June 26, 1942 to Earl Lee Roland and Florence Marie (Gerber) Roland. He graduated from Charlottesville High School in 1961. He served in the United States Army during the Vietnam War from 1964 to 1966. On May 2, 1964, Ron married Nancy Copple in Greenfield. Ron started out his career prior to his military service at Wilfong Oil, Standard Products, Eastside Screw and drove a route for Seven Up. After his military service, he returned to his truck route and later at Nabisco and General Foods as sales representative. In 1991, he started Ron Roland & Associates. He held auctions, appraisals, and had a new/used furniture and appliance store. Ron served as a school board member for Eastern Hancock for many years and was a former member of East Street Christian Church in Carthage. He loved NASCAR and going to Anderson Speedway for races. In his free time, he enjoyed golfing, going to casinos, and most importantly spending time with his family. He is survived by his loving wife, Nancy Roland of Greenfield; son, David (Toni) Roland of Carthage; daughter, Julie (Jeff) Robertson of Greenfield; sister, Joyce (Bill) Kuhn of Urbandale, IA; grandchildren, Kevin (Brittany) Roland of Middletown, Bryce Robertson (Yulia Cleek) of Greenfield, and Seth Robertson of Greenfield; step grandchildren, Rusty Locker and Matt Locker; and great-grandchildren, Noah and Bo Roland of Middletown, and Westyn Robertson of Greenfield. He was preceded in death by his parents, Earl and Florence Roland. Visitation will be held on Thursday, July 1, 2021 from 3:00 p.m. until 8:00 p.m. at Erlewein Mortuary & Crematory, 1484 W. US Hwy. 40, Greenfield, IN 46140. A funeral service will be held on Friday, July 2, 2021, at 11:00 a.m. at the mortuary. Pastor Fred Powers will be officiating. Burial will follow at Asbury Cemetery in Morristown. In lieu of flowers, memorial contributions may be made by mail to Brookdale Hospice, 9100 Purdue Rd Ste 100, Indianapolis, IN 46268 or Hancock County 4-H Agricultural Foundation, INC Endowment Fund, 620, Apple St. Greenfield, IN 46140 or envelopes will be available at the mortuary. Friends may share a memory or condolence at www.erleweinmortuary.com.

The family of Ron Roland created this Life Tributes page to make it easy to share your memories.