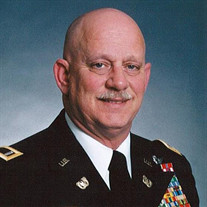 GREENFIELD – Robert E. “Bob” Truitt, age 69, of Greenfield, passed away on Thursday, July 5, 2018 at his residence. He was born on March 18, 1949 in Greenfield, the son of Robert Max and Evelyn T. (Shaw) Truitt. He graduated from Eastern Hancock in 1967 and received his bachelor’s from Indiana University. Bob served as a helicopter pilot in the US Army during the Vietnam War. He was ranked CW5 when he retired after 33 years. During his service he was awarded the following medals: Bronze Star, Meritorious Service Medal, and Air Medal with Valor. He was a Chief Warrant Officer 5, helicopter pilot, and instructor, at the Shelbyville National Guard Armory. Bob was a member of Masonic Lodge #217 in Waldron. He received the Sagamore of the Wabash award from Frank O’Bannon. Bob enjoyed photography and collecting antique cameras. He was known for his woodworking skills, and he loved making furniture, pens, ornaments, and clocks. He also assisted with the Eastern Hancock Boy Scouts. Bob is survived by his daughters, Amanda (Jim) Chaplin, Elizabeth Truitt (Michael Armstrong), and Abigail Truitt; wife, Kimberly Vanarsdale Truitt; step-children, Jason Kokotkiewicz, G. Thomas (Sara) Wright, Zachariah Wright, Timothy Wright, and Alexandria Wright; eight grandchildren; and two sisters, Anita Walker and Mary Dill. He was preceded in death by his parents; sister, Patricia Boylen; and son-in-law, W. Ross Rust. Visitation will be held on Monday, July 9, 2018, from 4:00 p.m. until 8:00 p.m. at Erlewein Mortuary & Crematory, 1484 W. US Hwy. 40, Greenfield, IN 46140. A masonic service will take place during the visitation at 7:30 p.m. A funeral service will be held on Tuesday, July 10, 2018, at 11:00 a.m. at the mortuary. Pastor Dave Oakes will be officiating. Burial will follow at Park Cemetery in Greenfield with military honors. In lieu of flowers, memorial contributions may be made to the Wounded Warrior Project at https://support.woundedwarriorproject.org or envelopes will be available at the mortuary. Friends may share a memory or a condolence at www.erleweinmortuary.com.

The family of Robert E. "Bob" Truitt created this Life Tributes page to make it easy to share your memories.