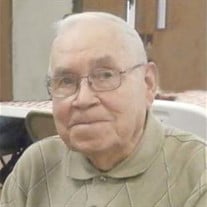 SHELBYVILLE - Robert Lee Nigh, 86, departed his rural Shelbyville home when he answered God’s call on Thursday, May 31, 2018. The third child of Otis Russel and Minnie Claire (Totten) Nigh, Bob “Doc” was born on June 25, 1931, on the family farm in Van Buren Township, Shelby County. He resided there his entire life, albeit in four different houses in three locations. On September 22, 1951, Bob married Geraldine “Jerry” Brown, who survives. Four children also survive: Mark R. (Paula) Nigh of rural Shelbyville, Jill (Steve) Crim of Manilla, Lisa (Terry) Grant of Pleasant View, and Ellen (Jerry) Kasik of Oakley, Michigan. Other survivors are grandchildren Carmen (Andrew) Hawk, Carey Nigh, Ryan (Kaitlin) Nigh, Kevin (Allison) Crim, Brian (Megan) Crim, Brad Grant, Emily (Nate) Cangany, Benjamin Kasik, and Nicholas Kasik. Great-grandchildren who survive are Jacob, Abigail, Graham, Reagan, Josephine, Beau, Kameron, Kyle, Kellen, Brooklyn, Jameson, Braelyn, Conner, and Tucker. Also surviving are a sister, Mildred “Mid” Winchester of Edinburgh, and William “Bill” Nigh of Chicago, Illinois. Preceding Bob in death were his parents, an infant daughter, Leah Jane Nigh, infant grandchildren, Kyle Robert Crim and Kara Jo Crim, and a sister, Helen Lawrence. Bob attended grade school at Jericho, junior high school at Fountaintown, freshman year at Moral High School and finished at Morristown High School, graduating in 1949. He attended Purdue University for one year, having to leave to keep the fourth-generation family farm going when his father became ill. A lifelong farmer, Bob was also involved in his church and community. Always a part of the Fairview United Methodist Church, he was an active member, serving as the Administrative Board Chairman, Sunday School Superintendent, and a trustee for a number of years, as well as holding other positions. He dearly loved his church, and when a tornado destroyed the old building in 1986, it was a rare day after harvest was completed when Bob didn’t appear with carpentry tools in hand to help rebuild the structure. Various county boards benefited from his service, including: Shelby County ASCS, Shelby County FSA, and Shelby County Rural Electric Community Fund. He was also a member of Shelby County Pork Producers. When the elementary schools were built, he was a Van Buren Township representative for the Shelby Eastern Schools School Building Corporation. Following the family tradition, he served in Van Buren Township’s government, 1987-1998, as an advisory board member. For approximately 30 years, he was on the Fountaintown Volunteer Fire Department Board of Directors. He was the 4-H leader for the Van Buren Boys 4-H Club in the 1960s and 1970s. In 2004, he was recognized as the Shelby County Master Farm Conservationist. Bob enjoyed bowling in his younger years in the Tuesday Night Owl League at Morristown Lanes and was an avid Purdue fan. Attending the many sporting events of his grandchildren was a favorite pastime. Dogs were Bob’s favorite pets, and it was not uncommon to see him accompanied by the family dog in the truck cab as he drove around checking on his crops. He also enjoyed relaxing in his swing under the tree while interacting with the dog. In later years he relocated to the enclosed front porch in warm weather to watch traffic and the activities on the farm and to visit with friends and family. Bob never had too much to say, but it was wise to listen when he did. If possible, he was there for those who needed his help. Visitation will be held from 3:00 p.m. until 7:00 p.m. on Sunday, June 3, 2018, at the Fairview United Methodist Church, 1880 W. 900 N., Fountaintown, IN 46130. Funeral services will be on Monday, June 4, 2018, at 10:00 a.m. with viewing one hour prior to the service at the church. Interment will follow at New Palestine Cemetery. Memorial contributions are requested to Fairview United Methodist Church. The family expresses a special thanks to Our Hospice of South Central Indiana, Infinity Home Care, Dr. Jill Cole and Benesse Oncology Center, Janice Huntsman, and Mary Reuter. Online condolences or memories may be shared with Bob’s family at www.erleweinmortuary.com. Arrangements are being handled by Erlewein Mortuary & Crematory in Greenfield.

The family of Robert Lee Nigh created this Life Tributes page to make it easy to share your memories.