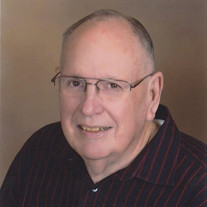 GREENFIELD – Robert “Bob” E. Younce, age 76, of Greenfield, passed away Friday, November 1, 2019. He was born in Indianapolis on May 27, 1943 to Robert Lloyd and Marian Elizabeth (Paidrick) Younce. He graduated from Warren Central High School in 1961 and attended Indiana State University. On June 16, 1972, he married Janeen Ellen (Denny) Younce in Indianapolis. Bob worked as a paper cutter and folder operator at White Arts Printing for 20 years and Masco Services for 12 years before retiring in 2008. He was a member of Amity United Methodist Church and The Early Ford V-8 Club of America. He was also a former member of the Packard club and Studebaker club. Bob was known as an automotive enthusiast and loved going to car shows. He enjoyed listening to 50’s music, discussing politics, and spending time with family and friends. He is survived by his loving wife, Janeen Younce; sons, Ben (Lyndsay) Younce and Adam Younce; brothers, Rick (Kathy) Younce, John (Linda) Younce and Steve (Anne) Younce; sister, Chris (David) Thomas; grandchildren, Rowan and Marin Younce; many loving nieces and nephews; and his precious dog, Ollie. He was preceded in death by his parents, Robert and Marian, and son, Jay Younce. Visitation will be held on Tuesday, November 5, 2019, from 3:00 p.m. until 7:00 p.m. at Erlewein Mortuary, 1484 W. US Hwy. 40, Greenfield, IN 46140. A funeral service will be held on Wednesday, November 6, 2019 at 11:00 a.m. also at the mortuary. Burial will follow at Washington Park East Cemetery in Indianapolis. Memorial contributions may be made by mail to Amity United Methodist Church, 6042 W. 100 N., Greenfield, IN 46140 or envelopes will be available at the mortuary. Friends may share a memory or condolence at www.erleweinmortuary.com

The family of Robert "Bob" Younce created this Life Tributes page to make it easy to share your memories.