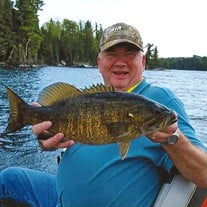 GREENFIELD – Robert L. “Bob” Bertsch, age 62, of Greenfield, passed away on Thursday, December 7, 2017. He was born on October 23, 1955 in Decatur, IN as the son of Godfrey J. and Anita (Lehman) Bertsch. He graduated from South Adams High School in 1974. Bob married Brenda J. (Bixler) on December 14, 1974 in Berne, IN. He worked for Service Engineering Inc. in Greenfield as a sales manager for 15 years. He was a member of Trinity Park United Methodist Church. Bob enjoyed fishing, gardening, cooking and traveling the world. He loved spending time with his family and adored his grandchildren. Bob is survived by his wife, Brenda Bertsch of Greenfield; son, Jason R. (Kelly) Bertsch of Whiteland, IN; daughter, Danae L. (Joseph) Young of New Castle; mother, Anita Bertsch of Bluffton, IN; sisters, Ruth (Harry) Anderson of Geneva, IN, Becky (Denny) Caffee of Geneva, IN, Rhonda (Eric) Tonner of Bluffton, IN and Roxanne (Jeff) Roop of Geneva, IN; three grandchildren, Ben, Luke and Maggie; and mother-in-law, Carol Bixler of Greenfield. He was preceded in death by his father, Godfrey Bertsch. A funeral service will be held on Saturday, December 9, 2017, at 11:30 a.m. at Trinity Park United Methodist Church, 207 W. Park Avenue, Greenfield, IN 46140 with viewing one hour prior to the service. Reverend Larry VanCamp will be officiating. Burial will take place at a later date at Mennonite Reformed Evangelical Cemetery in Berne, IN. Memorial contributions may be made by mail to Luke Bertsch Benefit Account, c/o Erlewein Mortuary, 1484 W. US Hwy. 40, Greenfield, IN 46140 or envelopes will be available at the church. Friends may share a memory or a condolence at www.erleweinmortuary.com. Arrangements are being handled by Erlewein Mortuary & Crematory in Greenfield.

The family of Robert L. "Bob" Bertsch created this Life Tributes page to make it easy to share your memories.