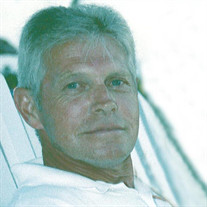 GREENFIELD – Richard P. Canter, age 71, of Greenfield, Indiana, passed away Tuesday, August 25, 2020, at Hancock Regional Hospital after a long bout with cancer. Richard was born in Anderson, Indiana on May 25, 1949. He is the son of Richard D. and Elizabeth J Canter. He is survived by his wife of 46 years, Louanna, who he married on February 16, 1974. He is also survived by 6 brothers, one sister and a half-brother. Siblings are Daniel J. (Loretta) Canter, Dennis N. (Pam) Canter, Douglas M. (Rebecca) Canter, David V. (Diane) Canter, Duane J. (Fran) Canter, Denise (Jeff) Canter Rollings, Donald B. (Brenda) Canter, and Devon Canter. He is also survived by his beloved talking African Gray parrot B.G., age 24. He is also survived by 20 nieces and nephews, and many, many, great friends. Richard retired as an iron worker of Local 22 after 22 years. After retiring, he and his wife Louanna moved to the Florida Keys, where they lived for 22 years before returning to Greenfield in 2018. Richard was a certified SCUBA diver instructor, and a captain driving glass bottom and snorkel boats at John Pennecamp State Park for most of his time in the Keys, where he received two awards for lifesaving. He is also a lifetime member of the VFW of Greenfield and a former member of the American Legion. Richard served in the United States Navy as a SeaBee and was a decorated veteran of the Vietnam War. Richard was a devoted and loving husband, a great brother and uncle, and a friend to many. He will be sorely missed. The family would like to thank all the wonderful Doctors and Nurses at the hospital for their excellent care and compassion. In Richard’s words, “they are all terrific”. Visitation will be held on Friday, August 28, 2020, from 5.00 p.m. until 8:00 p.m. at Erlewein Mortuary & Crematory, 1484 W. US Hwy. 40, Greenfield, IN 46140. A funeral service will be held on Saturday, August 29, 2020, at 11:00 a.m. at the mortuary with viewing one hour prior to the service. Pastor Jack Stout will be officiating. Burial will follow at Park Cemetery in Greenfield with military honors presented by the Greenfield Veterans Honor Guard. As a reminder, masks are required in public indoor spaces and please practice social distancing. In lieu of flowers, memorial contributions may be made by mail to the Hancock Regional Hospital Foundation, Cancer Center or Hospice, 801 N. State Street, Greenfield, IN 46140, or envelopes will be available at the mortuary. Friends may share a memory or condolence at www.erleweinmortuary.com.

GREENFIELD &#8211; Richard P. Canter, age 71, of Greenfield, Indiana, passed away Tuesday, August 25, 2020, at Hancock Regional Hospital after a long bout with cancer. Richard was born in Anderson, Indiana on May 25, 1949. He is the son of... View Obituary & Service Information

The family of Richard P. Canter created this Life Tributes page to make it easy to share your memories.