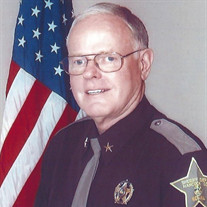 GREENFIELD - Nicholas “Nick” Russell Gulling, age 78, of Greenfield, passed away on Monday, February 17, 2020. Nick was born on May 8, 1941 in Indianapolis, IN, the second son of Jack Nicholas Gulling and Johanne Perrin Gulling. His mother remarried to Harry Wenz. His father remarried to Maude “Jerre” Hardingham Cowee. He lived with his mother and stepfather in Rancho Santa Fe, California, where he graduated from San Dieguito High School and attained the rank of Captain in the Cadet Corps. He also attended San Diego City College. As a teenager, he worked for his father in the summer at Gulling Auto Electric in Indianapolis and drove an ambulance in San Diego, California in the winter. After graduation, he moved to Indianapolis and was a member of the Washington Township Police Department. He joined the Indiana State Police in 1965 and served under Governor Otis Bowen. In addition to road patrol, he worked undercover in the intelligence division. He retired in 1977 after 12 ½ years with the rank of 1st Sergeant. He was a member of the Indiana National Guard U.S. Army Reserve for 14 years. He was a Company Commander of the Company C, 138th Signal Battalion in Greenfield and was a Captain when he retired. His stepfather owned Royal Foods in Indianapolis and he worked there after he left the Indiana State Police. From there, he went to work for James & Associates Architect Company as a mechanical electrical inspector. He started his own business, Suburban Security installing and maintaining business and home alarms. Brandywine Music Hall opened in Greenfield and Nick was in charge of security for the music stars and facility. In 1981, he was appointed Chief Deputy of the Hancock County Sheriff’s Department by Sheriff Malcolm Grass. He was elected sheriff for two terms in 1982 and 1986. He was instrumental in the designing and construction of the new Hancock County Jail which opened in 1988. He had over 40 years of law enforcement training and experience. He is a graduate of three Law Enforcement Academies: F.B.I. National, Indiana State Police, and the Marion County Sheriff. Due to term limits, and not able to run for another term as sheriff and he was appointed jail commander from 1991-1998. During that time, he was elected to three two-year terms as Indiana State Representative for District 53 which included Hancock and Rush Counties. He would take a leave of absence from the sheriff’s department while he served at the Indiana State House. He ran again for Hancock County Sheriff and was elected to two more terms in 1998 and 2002. He retired from there in 2007 with 25 years of service. He was a member of Indiana Sheriff’s Association, where he was a lifetime member, American Legion Post #119, Hancock County FOP #140, and AARL Ham Radio Membership License. After his retirement, he was hired to be project manager for the building of the EOC (Emergency Operations Center). He was later appointed to serve as supervisor there for a few months. Pyramid Architects, who designed the EOC, hired him as a consultant for cities and counties regarding radio systems. He retired permanently in 2017. As a young man, he received his Amateur (Ham) Radio license and up until the time of his passing he continued to be an active ham radio operator (N9JIE). He took up photography as a hobby. This became useful as he took crime scene, family, and wedding photos. Nick developed a love of “classic cars”. At car shows he would point and say, “I had one like that” (repeat, repeat). He said the best ones were the black ones. A local Boy Scout started a project to earn his rank of Eagle Scout. He wanted to build a memorial for fallen police officers. Nick was a member of the FOP #140 and he and other officers joined the scout in the project and a beautiful memorial was completed and dedicated at the FOP in 2014. After retirement, he and Carolyn enjoyed traveling and spent winters in sunny Sarasota, Florida. Nick is survived by his fiancé, Carolyn Grass; siblings, Gerald “Gerry” (Brenda) Wenz and Grace (Dick) Goldstine; nieces, Sharon (Tom) McKnight and Susie (Michael) Emmelman; several additional nieces and nephews; stepson, Tom (Molly) Williams, Sr.; and many friends who were loved as family. He was preceded in death by his mother and stepfather, Johann and Harry Wenz; father and stepmother, Jack and Jerre Gulling; brother, David P. Gulling; stepbrother, Harry “Bud” Wenz, Jr.; and nephew, Stephen Gulling. Visitation will be held on Friday, February 21, 2020, from 2:00 p.m. until 8:00 p.m. at Brandywine Community Church, 1551 E. New Road, Greenfield, IN 46140. A funeral service will be held on Saturday, February 22, 2020, at 11:00 a.m. with viewing one hour prior to the service at Brandywine Community Church. Pastor Matt Wickham will be officiating. Burial will follow at Park Cemetery in Greenfield with military rites presented by the Greenfield Veterans Honor Guard. The family would like to thank the Sue Ann Wortman Cancer Center for their loving care throughout Nick’s illness. Also, they thank Suburban Hospice for the compassionate care provided. In lieu of flowers, memorial contributions may be made by mail to the Hancock County Sheriff AED Fund, 123 E. Main Street, Greenfield, IN 46140 or Sue Ann Wortman Cancer Center at Hancock Health Foundation, 801 North State Street, Greenfield, Indiana 46140. Envelopes will be available at the church. Friends may share a memory or condolence at www.erleweinmortuary.com. Arrangements are being handled by Erlewein Mortuary & Crematory in Greenfield.

The family of Nick Gulling created this Life Tributes page to make it easy to share your memories.