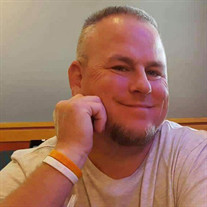 GREENFIELD – Michael “Mike” Wayne Pyle, age 47, of Greenfield, passed away Sunday, April 15, 2018. He battled Synovial Sarcoma for eight years, a rare form of cancer due to chemical exposure he received while fighting for his country. He was born on October 17, 1970 in St. Louis, MO as the son of Ronald and Sandra (Harwell) Pyle. He graduated from William Fleming High School in Roanoke, VA in 1989. Mike served in the Navy during the Persian Gulf War in 1989-1993. He married Krystal “Krysty” (Blount) Pyle on April 8, 2000 in Goodview, VA. He worked as a truck driver for over 12 years. Mike was an avid sports fan and enjoyed watching all sports. He was a devoted family man, and always had a smile through good times and bad. If you ever met Mike, you would never forget him. Mike is survived by his wife, Krysty Pyle; daughter, Mallory Pyle, age 12; son, Preston Pyle, age 7; mother, Sandy Pyle; brother, Dave Pyle; niece, Kylene Gibson; brother-in-law, Chad (Kathy) Blount; nephew and niece Zach and Carley Blount; father-in-law, Doug (Darla) Blount. He will also be dearly missed by many lifelong friends and family. He was preceded in death by his father, Ronald Pyle; and mother-in-law, Patricia Blount. Mike’s celebration of life will take place at 6:30 p.m. on Friday, April 20, 2018 at Hollins Road Church of the Brethren, 2404 Hollins Rd NE, Roanoke, VA 24012-5034. Local arrangements are being handled by Erlewein Mortuary & Crematory in Greenfield. With a smile on his face, Mike requested that all his friends and family drink a beer in his honor. Friends may share a memory or a condolence at www.erleweinmortuary.com.

GREENFIELD &#8211; Michael &#8220;Mike&#8221; Wayne Pyle, age 47, of Greenfield, passed away Sunday, April 15, 2018. He battled Synovial Sarcoma for eight years, a rare form of cancer due to chemical exposure he received while fighting for his... View Obituary & Service Information

The family of Michael "Mike" Wayne Pyle created this Life Tributes page to make it easy to share your memories.