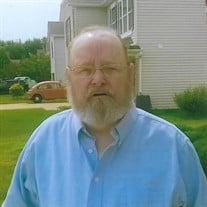 Mark Eugene Troxel, age 73, passed away on March 2, 2021. He was born on May 28, 1947 in Indianapolis to the late Donald and Miriam (Smith) Troxel. He attended Arsenal Technical High School, and, after leaving high school in 1966, he proudly enlisted in the US Army. Working in the Army as a helicopter mechanic, he received medals for his service in Vietnam, including medals for expert marksmanship. Returning stateside, he worked various jobs, including being a dump truck and snowplow driver for the Hancock County highway department. He spent most of his career as a car painter at several car dealerships and auto body repair shops, before retiring at age 62. Mark is survived by his son Mark Jr. and granddaughter Makayla and also leaves behind two brothers, Jerry and Bob. Mark led a fulfilling life. He cherished spending time with family and friends. He had a soft spot for animals. He traveled where he wanted to and did all he wanted to do. He enjoyed going to movies, concerts, car shows, cruise ins, the Indy 500, and watching NASCAR and football on TV. His hobbies included building model cars, playing pool, and fishing. The family would like to thank the staff at AMG Specialty Hospital for the care he received from them. Visitation will be held from 12:00 p.m. to 2:00 p.m. on Tuesday, March 9, 2021, at Erlewein Mortuary & Crematory, 1484 W US Hwy 40, Greenfield, IN 46140. A funeral service will take place immediately following the visitation at 2:00 p.m. Military rites will be presented by the Greenfield Veterans Honor Guard. At a future date, a column wall burial will take place at the Indiana Veterans Memorial Cemetery in Madison, Indiana. You may make charitable contributions to Disabled American Veterans in Mark’s memory. Friends may share a memory or condolence at www.erleweinmortuary.com.

Mark Eugene Troxel, age 73, passed away on March 2, 2021. He was born on May 28, 1947 in Indianapolis to the late Donald and Miriam (Smith) Troxel. He attended Arsenal Technical High School, and, after leaving high school in 1966, he proudly... View Obituary & Service Information

The family of Mark Troxel created this Life Tributes page to make it easy to share your memories.