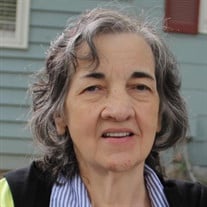 GREENFIELD - Marjorie K. (Brown) Burris, age 70, of Greenfield, passed away Friday, June 22, 2018 at her home. She was born on October 30, 1947 as the daughter of Orzo A. Brown and Virginia G. (Potter) Brown. She graduated from Martinsville High School in 1965 and attended Olivet Nazarene College, Union Bible Seminary, and Covenant Foundation College. Marjorie loved to sing, play the piano, and study the Bible. She peppered each of her brothers with questions regarding their respective fields of knowledge. She shared much of life with her two sisters, each of them having two daughters and a son, in that order. As the next to youngest child, she was proud to be one of nine with two older sisters, five older brothers, and her younger brother, Joe. Later in life, she became a prayer warrior—praying earnestly and daily for her children, grandchildren, siblings, family, neighbors, and friends. More than anything else, it was her desire that they know Jesus personally. Marjorie attended Greenfield Wesleyan Church for many years, playing the piano and singing specials. A homemaker while her children were young, Marjorie worked outside the home later in life, most recently as a door greeter for Walmart for 13 years, from 2001 until 2014. She is survived by her children, Beth Burris of Greenfield, Katrina (Aaron) Baker of Jonesboro, Arkansas, and Nathan (Miki) Burris of Carthage; grandchildren, Kristen Baker, David Burris, Tyler Baker, and Ryan Burris; great-great-nephew/grandchild, Matthew Thompson; great-grandchildren, Paisley and Brantley of Arkansas; sister, Lynn Ellen Allen of Virginia; brothers, Glen Miles of Plainfield, Gordon (Donna) Brown of Spencer, Donald (Mary) Miles of South Carolina, Kenneth (Sally) Brown of Paragon, Joseph Brown of Arizona; brother-in-law, Loy Brown of State Line; sister-in-law, Ella Jane Brown of Indianapolis; 23 nieces and nephews; their extended families; and paternal aunt, Helen Faye Huber of Greenfield. She was preceded in death by her parents, Orzo and Virginia Brown; loving stepmother, Beatrice M. (Scotten Miles) Brown; sister, Sandra Brown; brother, Phillip Brown; sister-in-law, Vonda Miles; nephew, Samuel Miles; and great-great-niece and nephew/grandchildren, Victoria Coy and Isaiah Haines. Visitation will be held on Wednesday, June 27, 2018, from 4:00 p.m. until 8:00 p.m. at Erlewein Mortuary & Crematory, 1484 W. US Hwy. 40, Greenfield, IN 46140. A funeral service will be held on Thursday, June 28, 2018 at 1:00 p.m. at Greenfield Wesleyan Church, 400 S. Noble St, Greenfield, IN 46140. Pastor Michael Frausto will be officiating. Burial will take place on Friday, June 29, 2018 at 11:00 a.m. at Samaria Baptist Church Cemetery in Paragon, IN. Memorial contributions may be made by mail to the Greenfield Wesleyan Church, 400 S. Noble St, Greenfield, IN 46140, or envelopes will be available at the mortuary and church. Friends may share a memory or a condolence at www.erleweinmortuary.com.

GREENFIELD - Marjorie K. (Brown) Burris, age 70, of Greenfield, passed away Friday, June 22, 2018 at her home. She was born on October 30, 1947 as the daughter of Orzo A. Brown and Virginia G. (Potter) Brown. She graduated from Martinsville... View Obituary & Service Information

The family of Marjorie K. (Brown) Burris created this Life Tributes page to make it easy to share your memories.