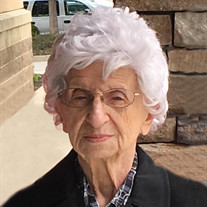 INDIANAPOLIS – Marjean A. (Arvin) Schlachter, age 99, of Indianapolis, passed away on Tuesday, October 23, 2018. She was born on June 29, 1919 in Loogootee, IN as the daughter of Robert Ernest and Agnes (Dant) Arvin. She graduated from Alfordsville High School and married Raymond N. Schlachter on January 21, 1941. She was a member of St. Andrews Catholic Church, St. Lukes Catholic Church, and St. Lawrence Catholic Church. Marjean was known for her delicious cooking of fried chicken, beef-n-noodles, and yeast rolls. She enjoyed playing cards with her friends and gardening. Marjean is survived by her son, John (Ginny) Schlachter of Mt. Prospect, IL; daughters, Janet Huebner of Greenfield and Judy (Sonny) Mennel of Anderson, SC, 6 grandchildren, Jennifer (Chris) McGuire, Stephen (Michelle) Huebner, Todd (Melanie) Schlachter, Julie (Demo) Stathis, Drew Schlachter, and Kelsy (Andrew) Rusk; 16 great-grandchildren; and sister, Roberta Smith of Washington, IN. She was preceded in death by her parents; husband, Raymond; brother, Cornelius Arvin; grandson, J. Michael Schlachter; and son-in-law, Robert Huebner. Visitation will be held on Monday, November 5, 2018, from 10:30 a.m. until 12:00 p.m. at St. Michael Catholic Church, 519 Jefferson Boulevard, Greenfield, IN 46140. A mass of Christian burial will take place following the visitation at 12:00 p.m. Private burial will take place at Oaklawn Memorial Gardens in Indianapolis. Memorial contributions may be made by mail to the Salvation Army, 6060 Castleway W. Drive, Indianapolis, IN 46250 or the donor’s favorite charity. Envelopes will be available at the church. Friends may share a memory or a condolence at www.erleweinmortuary.com. Arrangements are being handled by Erlewein Mortuary & Crematory in Greenfield.

INDIANAPOLIS &#8211; Marjean A. (Arvin) Schlachter, age 99, of Indianapolis, passed away on Tuesday, October 23, 2018. She was born on June 29, 1919 in Loogootee, IN as the daughter of Robert Ernest and Agnes (Dant) Arvin. She graduated from... View Obituary & Service Information

The family of Marjean A. Schlachter created this Life Tributes page to make it easy to share your memories.