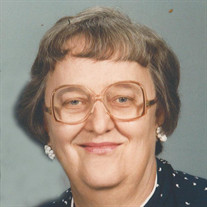 FOUNTAINTOWN – Marie Louise (Low) DeShong, age 90, of Fountaintown, passed away Saturday, April 3, 2021 at Major Hospital in Shelbyville. She was born in Hancock County on December 6, 1930 to Raymond Claude and Garnetta Fern (Montrose) Low. She graduated from Greenfield Central High School. She married Robert Carl DeShong on June 17, 1951 in Indianapolis. Marie worked as a dental assistant in Greenfield before her marriage. She was a member of Mt. Lebanon United Methodist Church and was a Den Mother for Cub Scouts and Brownie leader for Girl Scouts. In her free time, she enjoyed reading, word puzzles, and gardening, especially with flowers. She liked to volunteer at the food pantry and cook meals for her family. Her biggest joy was her family. She was a caring wife, mother, grandmother, and great-grandmother, who will be greatly missed. Marie was an avid traveler and went on trips all over the United States and Europe. She is survived by her children, Tom DeShong (Mary) of Colorado, Judy Smith (Stan) of Noblesville, Chris DeShong of Fountaintown, and Andy DeShong of Michigan; grandchildren, Troy Smith (Megan), Leah Titzer (Ryan), Christina Moore (Jeff), Cody Smith and Aspen DeShong; great-grandchildren, Elijah, Logan and Connor Smith, Eloise, Adaline and Lukas Titzer, and Annie Moore. She was preceded in death by her parents, Raymond and Garnetta; husband, Robert DeShong; brothers, James and Richard Low; and grandson, Jake DeShong. Visitation will be held on Friday, April 9, 2021, from 10:00 a.m. until 11:30 a.m. at Mt. Lebanon United Methodist Church, 3447 IN-9, Greenfield, IN 46140. A funeral service will follow at 11:30 a.m. Pastor Fred Powers will be officiating. Burial will take place at Park Cemetery in Greenfield. In lieu of flowers, memorial contributions may be made by mail to the Mt. Lebanon United Methodist Church, 3447 IN-9, Greenfield, IN 46140, or envelopes will be available at the church. Friends may share a memory or condolence at www.erleweinmortuary.com.

The family of Marie DeShong created this Life Tributes page to make it easy to share your memories.