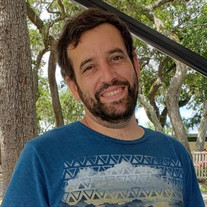 FORTVILLE - Kenneth "Kenny" Milan Sylvester, age 37, of Fortville, IN crossed over in his sleep after falling ill on Tuesday, February 18, 2020. Kenny was born on October 28, 1982 to Jeff Sylvester and Karen Norris Sylvester at Community Hospital East in Indianapolis. He grew up in Fortville, IN and attended the Mt. Vernon schools from kindergarten through high school, graduating in 2001. He then went on to obtain a Bachelors Degree in Business Management & Human Resources from the IU Kelley School of Business. He spent the last 6 years working as an insurance adjuster for Damage Claims Services. On August 4th, 2009 Kenny married his wife, Kristin Darnell Sylvester whom he loved deeply. He enjoyed spending time with friends, family, camping and being a father to his son and goddaughter. Kenny was a loving and devoted husband, father, son, brother, uncle, and friend. He leaves behind his wife, Kristin, son, Elliot Harry Sylvester, goddaughter, Mychelle Jean Miller and his parents, Jeff and Karen Sylvester (Fortville). He's also survived by his grandparents, Milan Kent and Cis Sylvester (Hyattville, WY) and RJ Sylvester (Foley, AL), his brothers Jeffrey Brown (Jamie, Ingalls), Jonny Sylvester (Tess, Fortville) and his sister, Kristen Gregg (Travis, Marianna, FL). He leaves behind 5 nephews, 3 nieces, and too many cousins to count. Also, his in-laws, Diana McClure Darnell, David and Diane Darnell, and Matt and Lindsey (Darnell) Willy survive. He was preceded in death by his maternal grandparents Kenneth (2004) and Lois (2019) Norris. There will be a celebration of Kenny's life this Sunday, February 23rd at 3:30 at New Life Christian Fellowship (1574 SR-234, Fortville, IN). There will be a time for visiting with family afterwards, followed by a dinner. In lieu of flowers, donations can be made for the Elliot Sylvester Education Fund to New Life Christian Fellowship. Friends may share a memory or condolence at www.erleweinmortuary.com. Arrangements are being handled by Erlewein Mortuary & Crematory in Fortville.

FORTVILLE - Kenneth "Kenny" Milan Sylvester, age 37, of Fortville, IN crossed over in his sleep after falling ill on Tuesday, February 18, 2020. Kenny was born on October 28, 1982 to Jeff Sylvester and Karen Norris Sylvester at Community Hospital... View Obituary & Service Information

The family of Kenneth "Kenny" Sylvester created this Life Tributes page to make it easy to share your memories.