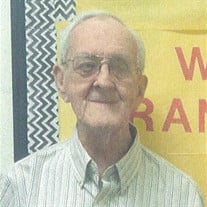 INDIANAPOLIS – Joseph Earl Miller, age 96, of Indianapolis, passed away on Friday, August 16, 2019 at the Franciscan Hospice House in Indianapolis. He was born in Peoria, Illinois and was adopted as infant by Joseph Christopher & Anna Amazon (Jones) Miller on June 1, 1923. He graduated from Clinton High School in 1941. Joseph was a Portrait of God’s Grace. He grew up in very difficult and lean Depression conditions. He was a good student, and was blessed by having his uncle, Jasper Long, see his great potential. He offered to send him to any university in the country. He chose Rose Hulman where he earned his Bachelor of Science Degree in mechanical engineering, graduating in three years. He served in the United States Army Air Corps during WWII in the rank of Pvt. 1st Class. He was a devoted husband who married, Beverly J. (Weyer) Miller on September 18, 1949. They were blessed with 67 years of life partnership. Mr. Miller spent most of his career as a traveling engineer contracted to numerous companies. His designs included everything from washing machine timers to rocket guidance systems. He worked for NASA in the Space Program with brief stints at Hampton, VA, Huntsville, Al, and Houston, TX. He was a member of American Society of Mechanical Engineers. Mr. Miller was also a member of Traders Point Christian Church since 1963, where he served as a Deacon for a few years. He loved reading His Bible and knew much about Biblical backgrounds. For years, he enjoyed watching Pastor Charles Stanley with Beverly after she became too ill to attend church. Joseph was a “Do it Yourself” type of guy and could fix about anything. He was a Boy Scout and supported his sons and Troop 69 at Traders Point. He enjoyed working outdoors and was a very intelligent and analytical man. He is survived by his three sons, Stephen (Deb) Brown of Gosport; Mark (Chris) Miller of Lake Worth, FL; Kevin (Carole) Miller of Greenfield; 8 grandchildren; and 9 great-grandchildren. He is preceded in death by his parents; wife, Beverly; uncle and father figure, Earl Jasper Long. Visitation will be held on Wednesday, August 21, 2019, beginning at 10:00 a.m. until 1:00 p.m. at Erlewein Mortuary & Crematory, 1484 W. US. HWY 40, Greenfield, IN, 46140. A funeral service will be held at 1:00 p.m., following the visitation. Burial will take place at Pleasant Hill Cemetery in northwest Marion County, at 3:30 p.m. In lieu of flowers, memorial contributions may be made by mail to Wheeler Mission Ministries, 245 N. Delaware Street, Indianapolis, IN 46204 or envelopes will be available at the mortuary. Friends may share a memory or condolence at www.erleweinmortuary.com.

INDIANAPOLIS &#8211; Joseph Earl Miller, age 96, of Indianapolis, passed away on Friday, August 16, 2019 at the Franciscan Hospice House in Indianapolis. He was born in Peoria, Illinois and was adopted as infant by Joseph Christopher & Anna... View Obituary & Service Information

The family of Joseph E. Miller created this Life Tributes page to make it easy to share your memories.