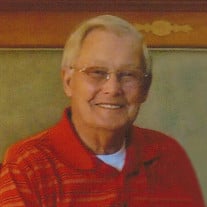 GREENFIELD – John Edward Stoops, age 82, of Greenfield, passed away on Sunday, October 28, 2018 at St. Vincent Hospital. He was born in Noblesville on February 29, 1936 to John Lawrence and Edna (Hatcher) Stoops. John proudly served in the U.S. Marines. He married Geneva (Sams) on July 15, 1962 in New Palestine. He worked as a millwright at International Harvested for over 30 years before retiring. John enjoyed vacationing in Florida and golfing, where he participated in leagues through his work. Him and his family were very active in drag racing sand rails in Laurel and in the Dunes. He adored his sons and enjoyed coaching them in baseball and spending time with them. John was known as a hard worker, ornery, funny, down to earth guy, and always gave his guys at work a hard time. John is survived by his wife, Geneva Stoops; daughter-in-law, Shannon Stoops; two great-grandchildren, Spencer Wade Stoops and Emma Gail Zamudin; brothers, Doug (Ellen) Stoops and James (Connie) Stoops; and sister, Karen (Mike) Beeson. He was preceded in death by his parents; two sons, Timothy Wayne Stoops and Tracy Wade Stoops; and six siblings. Visitation will be held on Friday, November 2, 2018, from 10:00 a.m. until 1:00 p.m. at Erlewein Mortuary & Crematory, 1484 W. US Hwy. 40, Greenfield, IN 46140. A funeral service will take place immediately following the visitation at 1:00 p.m. Ron Johnson will be officiating. Burial will follow at New Palestine Cemetery in New Palestine with military rites presented by the active duty. Memorial contributions may be made by mail to Rheumatoid Arthritis Foundation, P.O. Box 96280 Washington, DC 20077 or American Cancer Society, P.O. Box 22718, Oklahoma City, OK 73123. Envelopes will be available at the mortuary. Friends may share a memory or a condolence at www.erleweinmortuary.com.

The family of John Edward Stoops created this Life Tributes page to make it easy to share your memories.