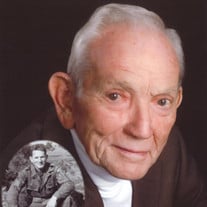 GREENFIELD - William Joseph Padgett, age 92, of Greenfield, passed away on Wednesday, September 9, 2020. Joe was born on November 12, 1927, the third son of Leo Orbie Padgett and Anna Mary Padgett of Greenfield. He graduated from Greenfield High School in 1946 and then attended General Motors Institute, graduating in 1949. He served in the U.S. Army infantry during the Korean War, earning a Bronze Star on the battlefield and rising to the rank of Master Sergeant. He returned home to Indiana in 1952, marrying his sweetheart Ann Katherine (Hyre) of Winchester and joining with his father and brother Jim to open Padgett Chevrolet in Morristown. For nearly 50 years, Joe worked at the Chevy dealership, often ten hours a day and six days a week. But he told everyone he knew that he never worked a day in his life - and he meant it. For Joe it wasn't work; he loved every minute of it. He served for many years on the St. Michael's Catholic Church Finance Committee; was among those who led the effort to build its school and new church building; and helped organize the annual church festival. He bowled in a league; helped organize the annual Morristown Soap Box Derby; and planned theme parties with good friends. He was a longtime member of Sertoma Club. He became a Colts season ticket holder when the Mayflower landed in 1984. He was preceded in death by his parents; brothers, John and James; sister, Jean (Gardner); and his wife Ann. Survivors include his four sons and their wives, J. Patrick (Pam), Philip Mark (Lori), Gregory (Ruth), and Robert (Margaret); his beloved wife, Lee (Swinney) Padgett; 16 grandchildren, 21 great-grandchildren, and 1 great-great-grandchild. Also, his stepfamily, Robert Swinney (Vicki), Sherry Swinney-Fox (Steve) who greatly enjoyed helping with his tomato patch. Visitation will be held on Saturday, September 19, 2020, from 9:00 a.m. until 11:00 a.m. at St. Michael Catholic Church, in the Life Center, 519 Jefferson Blvd., Greenfield, IN 46140. A Mass of Christian Burial will take place immediately following the visitation at 11:00 a.m. Burial will follow at Park Cemetery in Greenfield with military rites presented by the Greenfield Veterans Honor Guard. Memorial contributions may be made to the Memorial Scholarship Fund at St. Michael Catholic School, 515 Jefferson Blvd, Greenfield, IN 46140. Friends may share a memory or condolence at www.erleweinmortuary.com.

The family of Joe Padgett created this Life Tributes page to make it easy to share your memories.