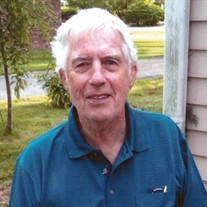 GREENFIELD – James Lee Fletcher “Jim,” age 81, of Greenfield, passed away Friday, March 23, 2018 at his home. He was born on May 22, 1936 in Hancock County, as the son of Marvin M. Fletcher and Evelyn J. (Ash) Fletcher. He graduated from Greenfield High School in 1954 where he starred in football, basketball, baseball, and track. He attended Ball State University to play football and met the love of his life, Jonnie (Spoor) Fletcher. They were married on September 8, 1957 in White County and spent 60 happy years together. He worked for Ford as a quality control inspector for 48 years before retiring. In his leisure time, he enjoyed bowling, golfing and Indiana University basketball. Many fun times were spent beating his grandkids in racing go-carts. He especially loved traveling with his wife, having seen all of the United States and many foreign countries. Jim attended Bradley United Methodist Church for 35 years, and most recently Greenfield Christian Church. He was also a member of the Greenfield Kiwanis club. He is survived by his wife, Jonnie Fletcher; sons, Jeff (Laura) Fletcher and Jay (Tes) Fletcher; daughter, Julie Grubbs; sister, Marjorie Folta; 11 grandchildren and 7 great- grandchildren. He was preceded in death by his parents. Visitation will be held on Wednesday, March 28, 2018, from 11:00 a.m. until 1:00 p.m. at Greenfield Christian Church, 23 N. East Street, Greenfield, IN 46140, with a memorial service immediately following at 1:00 p.m. In lieu of flowers, memorial contributions may be made by mail to the Alzheimer’s Association, 50 E. 91st St. #100, Indianapolis, IN 46240, or envelopes will be available at the church. Friends may share a memory or a condolence at www.erleweinmortuary.com. Arrangements are being handled by Erlewein Mortuary & Crematory in Greenfield.

The family of James "Jim" Lee Fletcher created this Life Tributes page to make it easy to share your memories.