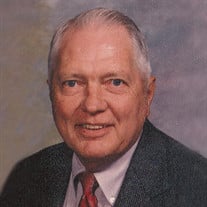 GREENFIELD – Jack B. Shamblin, age 89, of Greenfield, passed away peacefully surrounded by family on Tuesday, October 23, 2018 at his residence. He was born on November 12, 1928 in Blount County, Tennessee as the son of George Benjamin and Lily Mae (Breedon) Shamblin. He graduated from Star Tech in Knoxville, TN in 1949. Jack married Dona (Brooks) on July 20, 1967 in Greenfield. He was a tool and die engineer for Western Electric from 1952-1963 and also with Steel Parts Inc. in Tipton and retired after 12 years. Jack was a Nationwide Insurance agent for 10 years. He was a member of Park Chapel Church and Greenfield Lions Club. While with the Lions Club he was chairman of Clothe a Child and was former President of Lions Club. He was a past member of the Park Cemetery Board and Hancock Division of Cancer Crusade. Jack was instrumental in forming the Hancock County Rescue Unit, Greenfield Auxiliary Police Unit, and also the Hancock County Sherriff’s Reserve where he was captain of both for many years. He was also on the Cicero Police Department Reserve Unit in Cicero, Indiana, where he was commissioner. He was the last Justice of the Peace of Hancock County, Indiana. Jack is survived by his wife, Dona Shamblin of Greenfield; children, Gloria Shamblin of Pennsylvania, Jack B. (Chong Hwa) Shamblin, Jr. of Greenfield, and Greg B. (Trina) Shamblin of New Palestine; 9 grandchildren, Lori, Scot, Barry, Rosalind, Brad, Greg, Steven, Lyndsay, and Mandy; and 14 great-grandchildren. He was preceded in death by his parents; siblings, HD Shamblin, Austin L. Shamblin, Arnold F. Shamblin, Norman V. Shamblin, Dorothy K. Shamblin Fonner, and Bryan E. Shamblin. Visitation will be held on Sunday, October 28, 2018, from 2:00 p.m. until 6:00 p.m. at Erlewein Mortuary & Crematory, 1484 W. US Hwy. 40, Greenfield, IN 46140. A Lions service will be held at 5:30 p.m. Funeral service will be held on Monday, October 29, 2018, at 11:00 a.m. at the mortuary. Pastor Carol Wiley will be officiating. Burial will follow at Curry’s Chapel Cemetery in Greenfield. In lieu of flowers, memorial contributions may be made by mail to the American Cancer Society, P.O. Box 22718, Oklahoma City, OK 73123 or envelopes will be available at the mortuary. Friends may share a memory or a condolence at www.erleweinmortuary.com.

GREENFIELD &#8211; Jack B. Shamblin, age 89, of Greenfield, passed away peacefully surrounded by family on Tuesday, October 23, 2018 at his residence. He was born on November 12, 1928 in Blount County, Tennessee as the son of George Benjamin... View Obituary & Service Information

The family of Jack B. Shamblin created this Life Tributes page to make it easy to share your memories.