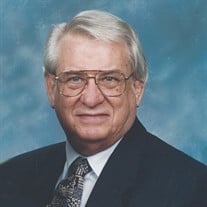 GREENFIELD – Harold “Andy” Anderson, age 89, of Greenfield, passed away Tuesday, October 5, 2021. Born on August 21, 1932, in Anderson, he was the son of Frank R. Anderson and Rosalie (Hardcastle) Anderson. He graduated from Anderson High School in 1951, where he held a State Championship title in Cross Country. He was a veteran of the United States Navy and received the National Defense Medal. Harold married Beverly McWilliams on June 23, 1957 in Elwood, Indiana. He worked for Ford Motor Company, as a machinist, for over 30 years before retiring in 1991. He was a member of Park Chapel Christian Church and the UAW. In his free time, he enjoyed bible study group, watching sports and loved a good card game with his friends. Harold loved spending time with his family. Harold is survived by his wife, Beverly Anderson of Greenfield; children, Stacey Latkowski of Scottsdale, AZ, Robert Anderson of Oviedo, FL, and Pam (Dale) Sever of Greenfield; grandchildren, Mike, Jon, Ryan, Amy, Kinsey, Ashley, Megan, Jennifer, Caitlan and Kelsey; 19 great-grandchildren; and lots of nieces and nephews. He was preceded in death by his sister and brother-in-law, Halcie (Charles) Wimmer; sister and brother-in-law, Frances (Lysle) Lewis; brother and sister-in-law, George (Florence) Anderson; and grandson, Alan Sever. Visitation will be held on Friday, October 8, 2021, from 4:00 p.m. until 6:00 p.m. at Park Chapel Christian Church, 1176 E McKenzie Rd, Greenfield, IN 46140. A funeral service will begin at 6:00 p.m. Pastor David Woods will be officiating. Burial with military honors will take place on a later date at Anderson Memorial Park Cemetery. Arrangements are being handled by Erlewein Mortuary & Crematory in Greenfield. In lieu of flowers, memorial contributions may be made to the Disabled American Veterans, by website at https://secure.dav.org/, or envelopes will be available at the church. Friends may share a memory or condolence at www.erleweinmortuary.com.

The family of Harold "Andy" Anderson created this Life Tributes page to make it easy to share your memories.