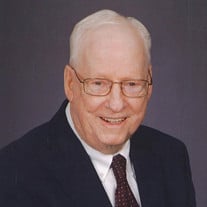 GREENFIELD – Gerald L. “Jerry” Shaw went to be with his Lord Jesus on Sunday, September 22, 2019. Born on January 5, 1934 at his home in Indianapolis, IN, he was the son of Morris Lee Shaw and Laura Marie Elizabeth Shaw. He was a member of Zion Lutheran Church in New Palestine, IN. Jerry graduated from Emmerich Manuel High School in 1951. He married the love of his life, Sarah “Patty” (Haywood) Shaw, on August 2, 1958. Attended post-secondary education at Vincennes University and Indiana Central University with a focus on accounting and Computer Technologies. He served in the U.S. Army during the Korean conflict reaching the rank of Corporal. He retired in 1985 from Western Electric Co. in Indianapolis after 33 years of service as Supervisor of Computer Operations. He went on to contract with AT&T through Durah Ent for 3 more years. He then established a retail and repair business, Shaw’s Boot and Shoe Store, that he operated for 12 years. His final retirement was from his son’s landscape business, David A. Shaw Landscape and Design, in 2003. Surviving Jerry are his beloved wife of 61 years, Sarah “Patty” Shaw of Greenfield; children, Beth (Carl) Ingle and David (Tracy) Shaw of Greenfield and Kenneth (Stacy) Shaw of Castalian Springs, TN; siblings, Kathleen (Charles) Klasing of Indianapolis and Robert (Marty) Shaw of New Castle; seven grandchildren, Michelle (Rob) Wolfla, Melissa (Peter) Adelsen, Amy Ingle, Shawn (Jacquie) Ingle, Cristina Shaw, Conner Shaw, and Collin Shaw; four great-grandchildren, Gabriel Wolfla-Klare, Addison Wolfla, Graham Wolfla, and Gunnar Ingle. Jerry was preceded in death by his son, Jeffrey Lee Shaw; his parents; his brother, Arnold Shaw; and great-grandson, Henry N. Adelsen. Visitation will be held on Thursday, September 26, 2019, from 10:00 a.m. until 12:00 p.m. at Zion Lutheran Church, 6513 W. 300 S., New Palestine, IN 46163. A funeral service will take place immediately following the visitation at 12:00 p.m. Pastor Jason Taylor will be officiating. Burial will follow at Park Cemetery in Greenfield. Memorial contributions may be made by mail to the Leukemia & Lymphoma Society, 9075 N. Meridian Street, Suite #150, Indianapolis, IN 46260 or Zion Lutheran Church Restore and Rejoice, 6513 W. 300 S., New Palestine, IN 46163. Envelopes will be available at the church. Friends may share a memory or condolence at www.erleweinmortuary.com. Arrangements are being handled by Erlewein Mortuary & Crematory in Greenfield.

The family of Gerald "Jerry" Shaw created this Life Tributes page to make it easy to share your memories.

GREENFIELD – Gerald L. “Jerry” Shaw went to be with his Lord...