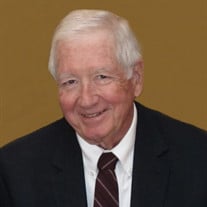 GREENFIELD – Lyle “Frank” White, age 84, of Greenfield, passed away after a brief illness on Monday, January 14, 2019 at St. Vincent Hospital in Indianapolis. He was born in Hancock County on January 26, 1934 to James Dewey and Doris Louise (Williams) White. He graduated from Greenfield High School in 1952. Frank married Meredith (Ross) on September 6, 1952 in Anderson, Indiana. Frank worked for Naval Avionics for 38 years before retiring in 1990. He initially started as a draftsman and throughout the years moved on to the position of Mechanical Engineering Technician. The last five years he was a project engineer for Aircraft Wiring Systems Support. Also during his tenure at Naval Avionics he enjoyed serving on the Welfare and Recreation Board from 1975-81. He also was secretary for 30 years on the board of the Naval Avionics Credit Union which is today known as Family Horizons Credit Union. Frank was an amazing self-taught artist from the time he was in grade school. He shared this talent throughout his life with family, friends and the workplace. Not only were his talents in demand to develop patches and seals for programs or projects around Naval Avionics but many retirees enjoyed his fun retirement portraits. Frank was a very caring husband, father and grandfather and did his share of travel over the years with his family. Frank was a member of Trinity Park United Methodist Church. In earlier days he had been a Sunday school teacher and a leader of the Methodist Youth Fellowship. He also enjoyed being outdoors and took great pride in keeping his home landscaped and gardens well maintained. He loved everything about airplanes including attending air shows, collecting books, making models and being a member of the Experimental Aircraft Association. Frank had a terrific sense of humor, was a great listener and never met a stranger. He will be greatly missed by many. He is survived by his daughter, Lynn A. (Maxwell) Fall, Indianapolis; grandson, Jarrett K. White; step-grandchildren, Elizabeth K. (Bobby) Kokinos and Alexander S. Fall; step-great-grandchild, Miranda E. Fall; daughter-in-law, Linda K. White; sister-in-law, Ruth Anne Herendeen; and three nieces and three nephews. He was preceded in death by his parents, James and Doris White; wife, Meredith White; son, James “Jim” White; and sister, Lois Jones. A memorial visitation will be held on Saturday, February 2, 2019, from 10:00 a.m. until noon at Trinity Park United Methodist Church, 207 W. Park Ave, Greenfield, IN 46140. A memorial service and celebration will take place at noon immediately following the visitation. Pastor Larry Van Camp will be officiating. In lieu of flowers, please consider a memorial contribution made by mail to Trinity Park United Methodist Church, 207 W. Park Ave, Greenfield, IN 46140, or envelopes will be available at the church. Friends may share a memory or a condolence at www.erleweinmortuary.com. Arrangements are being handled by Erlewein Mortuary & Crematory in Greenfield.

The family of Frank White created this Life Tributes page to make it easy to share your memories.