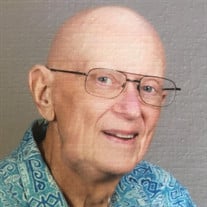 SHELBYVILLE – Eddie E. Etchason, age 91, of Shelbyville, passed away Saturday, August 15, 2020 in Greenfield, IN. He was born in Indianapolis, IN on January 5, 1929. He was the son of Chester A. Sr. and Una J. (Trees) Etchason. He was a graduate of Indianapolis Arsenal Technical High School in 1947. Mr. Etchason served in the U.S. Air Force from 1951-1955. Ed married Erma Jean Bonnell on July 21, 1950. He retired from Eli Lilly & Company in Indianapolis, IN after serving 35 years as an electrician/electronics technician. Ed was a charter member and former treasurer of St. James Lutheran Church in Greenfield, IN. In retirement, Ed enjoyed being a farm and lawn equipment dealer and wintering in Florida. Everyone had a friend in Ed. His wife, Erma, preceded him in death in 1998. Ed is survived by his daughters, Elaina E. Szeszycki of Indianapolis, IN and Erica J. Etchason of Roosevelt, NJ; son, Edmond “Mac” Etchason of New Palestine, IN; daughter-in-law, Lisa V. Etchason of New Palestine; son-in-law, Kenneth A. Szeszycki of Indianapolis, IN; grandchildren, Emma Etchason, Claire Etchason, Mitchell Etchason, and Benjamin Szeszycki. A private service will be held at a later date. Arrangements are being handled by Erlewein Mortuary & Crematory in Greenfield. Memorial contributions may be made to the donor’s charity of choice. Friends may share a memory or condolence at www.erleweinmortuary.com.

The family of Eddie E. Etchason created this Life Tributes page to make it easy to share your memories.