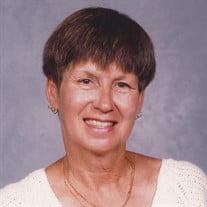 GREENFIELD – Dorothy N. (Stevens) Thompson, age 88, of Greenfield, passed away on May 20, 2020 at Greenfield Healthcare Center. She was born in Indianapolis on December 22, 1931 to William R. Stevens and Nevolin (Short) Lange. Dorothy worked for Plainfield Health Care as a laundry attendant for 20 years. She also worked for PSI Duke Energy as a custodian for 17 years before retiring in 1994 and was a cook and custodian for Avon Community Schools for many years. She enjoyed gardening, cooking (she made the best pies), picnics, shopping in Nashville, IN, going out to eat at Gray Brothers Cafeteria and caring for her beloved animals. She was loved and will be missed by her family. Dorothy is survived by her sons, James Michael (Diane) Jelf of Kingston, TN, William Alan (Marie) Thompson of Indianapolis, Gary Stephen (Cindy) Thompson of Greenfield; 7 grandchildren; 16 great-grandchildren; two brothers, Dennis Stevens of Carmel and William Stevens of Indianapolis; and a sister, Cherri (Dennis) Underwood of Hudson, FL. She was preceded in death by her parents, William Stevens and Nevolin Lange; sister, Barbara Harp; brother, James Stevens; step-mother, Mildred Stevens and great-grandson, Jackson Jelf. A private family graveside service will take place at Maple Hill Cemetery in Plainfield. In lieu of flowers, memorial contributions may be made by mail to Misty Eyes Animal Center, PO Box 1202, Brownsburg, IN 46112. Friends may share a memory or condolence at www.erleweinmortuary.com. Arrangements are being handled by Erlewein Mortuary & Crematory in Greenfield.

GREENFIELD &#8211; Dorothy N. (Stevens) Thompson, age 88, of Greenfield, passed away on May 20, 2020 at Greenfield Healthcare Center. She was born in Indianapolis on December 22, 1931 to William R. Stevens and Nevolin (Short) Lange. Dorothy... View Obituary & Service Information

The family of Dorothy N. Thompson created this Life Tributes page to make it easy to share your memories.