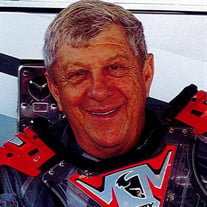 INDIANAPOLIS - Donald L. Hough, age 81, of Indianapolis, Indiana, passed away Friday, January 15, 2021 at Community North Hospital. He was born in Wilmore, Kansas on August 8, 1939 to Charlie W. and Mary (Guder) Hough. He graduated from Marshall High School in Marshall, Arkansas in 1957. He married Carolyn Roach on May 28, 1960 in Leslie, Arkansas. He was co-owner of Hough Drywall with his brother Ed from 1971 until Ed’s passing in 2017. Don was a lifelong member of The American Motorcycle Association (AMA), member of the Florida Trail Riders, SaddleBack Motorcycle Club and was one of the USA Team Managers for ISDE from 1989-1992. Don started racing hare scrambles and motocross in the late 60’s when off-road racing gained popularity. He raced across the US but was a legend to many in the Midwest, especially in the Indiana racing circle. Don Hough is a legend in the dirt bike racing community. He is survived by his loving wife of 60 years, Carolyn (Roach) Hough, of Indianapolis; daughter, Debra (Scott) Weiler of New Palestine sons, Kurt (Jacki) Hough and Aaron (Sheena) Hough of New Palestine; 10 grandchildren, Lauren, Amanda, Garrett, Whitney, Mitchell, Spenser, Ciarra, Josh, Preston, and Wade and 10 great grandchildren, and sister Ruby Morrison of Kansas. He was preceded in death by his parents; brothers; Ernest, Jerry, Clarence, and Ed; and sister, Rose. A public funeral service will be held at Mount Pisgah Baptist Church in Shelbyville, Indiana at 12:00 p.m. on Thursday, January 21, 2021, with visitation from 11:00 a.m. to 12:00 p.m. with service at 12:00 pm. Burial will follow at New Palestine Cemetery, in New Palestine, Indiana. As a reminder, the government mandate requires guests to wear masks when inside and please practice social distancing. In lieu of flowers, memorial contributions may be made to the Don Hough ISDE Fund to support a rider for the USA ISDE, c/o Stoney Lonesome MC, PO Box 241, Columbus, IN 47201 or to Mt Pisgah Baptist Church, 3718 E Blue Ridge Rd, Shelbyville, IN 46176. Envelopes will be available at the church. Friends are encouraged to share a memory or condolence at www.erleweinmortuary.com. Arrangements are being handled by Erlewein Mortuary & Crematory in Greenfield, Indiana.

The family of Donald L. Hough created this Life Tributes page to make it easy to share your memories.