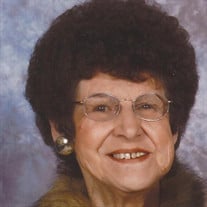 NEW CASTLE - Cleopha Walker, formerly of Greenfield, passed peacefully in her home in New Castle on Thursday, March 31. She was born on March 8, 1929 to Harry C. and Hazel A.(Wright) Andis. She was a 1947 graduate of Mt. Comfort High School and soon thereafter married George A. Walker on May 10, 1947. She was a longtime homemaker which allowed for being the primary caregiver for multiple family members over the years as well as daily care and significant influence for Granddaughters during childhood. She also enjoyed assisting daughter Margo in making deliveries and ribbon curling for “Cookies To You” while in operation up to October 2011. She took great pleasure and joy in being able to also care for all 5 of her Great-Grandchildren as opportunities arose during their childhoods. She was a lifelong member of Amity UMC where she was an active pillar in the women’s group as well as other committees over the many years of attendance. She was also an active volunteer for women’s ministries throughout Indianapolis and the surrounding area. She always had the energy and desire to stay busy and in her later years, she enjoyed putting together puzzles, doing word searches and watching the many birds at her feeders and wildlife and pups in the back yard. She had a special love for dogs and especially enjoyed daily visits from her Great-Grand pups Charly, Onyx and Hank. Survivors include daughter, Stephanie Mayes; granddaughters, Heidi (Jayson) Nunn of New Castle, Megan (Steve) Kendall; great-grandchildren, Ashtyn (Tyson Catron) Nunn, Caitlyn (Tanner Sharp) Nunn, Trisdyn Nunn, Shelby and Kegan Kendall; special great-grand-pups, Onyx Lin and Hank (Frank) Brackyn Nunn; great-great-grand-pups, Dozer and Indy Catron- Nunn. Preceded in death by father, Harry Andis; mother, Hazel Andis; husband, George A. Walker; sister, Delma Rasener; brother-in-law, Earl Rasener; son, Jeffrey Lynn Walker; daughter, Margo Sue West; special furry companions, Trina, Coey, Abby and Angel; and great-grand-pup the “Good Big Brown Doggie” Charly Jae Nunn. Arrangements are being handled by Erlewein Mortuary & Crematory in Greenfield. Memorial Contributions can be made to The Heart Foundation. Friends may share a memory or condolence at www.erleweinmortuary.com.

NEW CASTLE - Cleopha Walker, formerly of Greenfield, passed peacefully in her home in New Castle on Thursday, March 31. She was born on March 8, 1929 to Harry C. and Hazel A.(Wright) Andis. She was a 1947 graduate of Mt. Comfort High School... View Obituary & Service Information

The family of Cleopha Walker created this Life Tributes page to make it easy to share your memories.