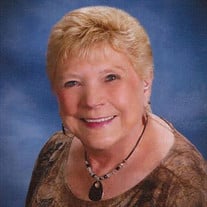 GREENFIELD – Carolyn V. (Martin) Jolly, age 75, of Greenfield, passed away on Wednesday, December 27, 2017 at Cumberland Trace in Plainfield, IN. She was born on September 18, 1942 in Indianapolis as the daughter of Cecil V. and Eva E. (Ray) Martin. She graduated from Arsenal Tech High School in 1960. Carolyn married Kenneth I. Jolly on December 17, 1960 in Indianapolis. She was a dance teacher for over 20 years. Carolyn was also an insurance representative for Insurance Specialists for over 10 years in Cumberland. She was a member of Bradley United Methodist Church, where she had been the children’s choir director and a member of the church choir. She was also a member of the Order of Eastern Star Oakland Chapter #159, where she was a Past Worthy Matron, Past District 11 Deputy, and Past Grand Warder. Carolyn enjoyed reading and loved spending time with her family and Eastern Star family. Carolyn is survived by her husband of 57 years, Kenneth I. Jolly of Greenfield; daughters, Virginia (Mike) Jones of La Porte, IN and Tamara (Terry Jones) Miller of Plainfield, IN; sister, Evelyn (Mike) Dollens of Tipton, IN; four grandchildren, Jena (Matthew) Rejak, Jamelyn (Christopher) Webb, Joshua Jones, and Sarah Miller; and four great-grandchildren. She was preceded in death by her parents, Cecil and Eva Martin. Visitation will be held on Friday, December 29, 2017, from 3:00 p.m. until 7:00 p.m. with an Order of Eastern Star service at 6:45 p.m., all at Erlewein Mortuary & Crematory, 1484 W. US Hwy. 40, Greenfield, IN 46140. A funeral service will be held on Saturday, December 30, 2017, at 10:30 a.m. at the mortuary. Pastor Charlie Wilfong will be officiating. Burial will follow at McCray Cemetery in Wilkinson, IN. In lieu of flowers, memorial contributions may be made by mail to the American Cancer Society, P.O. Box 22718, Oklahoma City, OK 73123-1718, or envelopes will be available at the mortuary. Friends and family may share a memory or a condolence at www.erleweinmortuary.com.

GREENFIELD &#8211; Carolyn V. (Martin) Jolly, age 75, of Greenfield, passed away on Wednesday, December 27, 2017 at Cumberland Trace in Plainfield, IN. She was born on September 18, 1942 in Indianapolis as the daughter of Cecil V. and Eva E.... View Obituary & Service Information

The family of Carolyn V. (Martin) Jolly created this Life Tributes page to make it easy to share your memories.