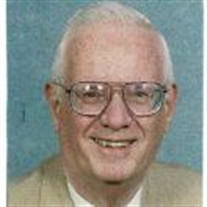 GREENFIELD - Bruce Allerton Mitchell, age 92, of Greenfield, entered his rest in peace on April 2, 2020, at his home. He was born November 12, 1927 in Bronxville, New York, to Lt. Col. Donald E. Mitchell and Helene A. Mitchell. He grew up in eastern New York state, and graduated from high school at Chatham, New York. He graduated from St. Paul Seminary in Kansas City, Missouri, and obtained a Bachelor’s Degree in Communications from the University of Evansville. He met the love of his life Joyce (Lakin) on a blind date. They were married December 19, 1953. Bruce enjoyed an interesting and varied career. He loved communications. In his earlier years, he worked as an apprentice at General Electric in Pittsfield, Massachusetts. In the mid 1940’s, he worked for a newspaper, and as a writer/announcer at several radio stations. He served in the U. S. Air Force during the Korean War, travelling the country training military staff. This was followed by 16 years as a Field Engineer with McDonnell Douglas. He was on the aircraft carrier Enterprise during the Cuban missile crisis, and knew everything there was to know about the Phantom F-4. He later became a magazine editor with McDonnell Douglas. In the early 1970’s, he followed a call to the ministry in the United Methodist church, serving churches in Missouri, Indiana, Florida and Michigan, retiring from the appointive pastorate in 2008 at Whittemore, Michigan. He hosted a number of travel groups who visited the Holy Lands, and subsequently hosted groups travelling worldwide. He enjoyed writing, and wrote newspaper columns and magazine articles about religion and travel, as well as a book about Christian witnessing. He enjoyed working in radio as a DJ in Texas, as well as a Christian music show in Rensselaer, Indiana, co-hosted with his wife. Bruce loved music, story telling, and had a wicked sense of humor. He loved to read, particularly biographies and military novels. He loved taking cruises with his wife and travelled the world with her. He loved art, and was always creating things by painting or sewing. He particularly loved doing embroidery projects in his later years. He was always thinking about the next project he could create, and loved displaying them in his home. He leaves to honor his memory his beloved wife of 66 years, Joyce (Lakin) Mitchell, as well as children Linda (Sam) Gould, of Bemidji, Minnesota, Amy (Vic) Kurz of New Berlin, Pennsylvania, Greg (Michelle) Mitchell of Enterprise, Oregon, and Lisa (James) Smith of Greenfield, Indiana, and a brother, Roger (Barbara) Mitchell of North Stonington, Connecticut. Also surviving are 2 nieces, 17 grandchildren and 26 great-grandchildren. He was preceded in death by his parents and his son, Jeff Mitchell. Services will be held at a later date, with interment at the Great Lakes National Cemetery in Holly, Michigan. Friends may share a memory or condolence at www.erleweinmortuary.com. Arrangements are being handled by Erlewein Mortuary & Crematory in Greenfield.

GREENFIELD - Bruce Allerton Mitchell, age 92, of Greenfield, entered his rest in peace on April 2, 2020, at his home. He was born November 12, 1927 in Bronxville, New York, to Lt. Col. Donald E. Mitchell and Helene A. Mitchell. He grew up in... View Obituary & Service Information

The family of Bruce Mitchell created this Life Tributes page to make it easy to share your memories.