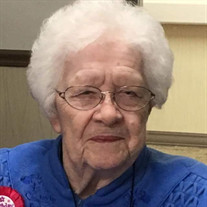 SHELBYVILLE - Barbara Lee (Walker) Leary, 93, of Shelbyville, IN passed away January 27, 2020 at Cypress Run Health Care in Morristown, IN. She was born January 30, 1926, in Greenfield, Indiana, the daughter of Carl Alfred Walker and Gertrude Emma (Johnson) Walker. On February 3, 1945, she married Hugh Leary, they were married 55 years and he preceded her in death on February 27, 2000. Barbara is survived by her daughters, Cynthia J Fair, Kathy G Fuller (Nancy Lee), Jennifer S Earl (Doug Stephenson); and her sons, Daniel R Leary (Kendra) and Les W Leary (Rhonda Adams); and her sister-in-law, Cleopha Walker. Barbara was proud to be the Grandmother to 11 and the Great-grandmother to 20 and a soon to be born a Great-great-grand daughter. In addition to Hugh, Barbara was preceded in death by her parents; son, Roger Alan Leary; brother, George A Walker. Barbara graduated in 1943 from Greenfield High School in Greenfield, Indiana. She enjoyed keeping financial books and worked with her husband in the family LP Gas business as a bookkeeper after the children were all in school. She exemplified her Christian faith and had a passion for singing, to that end she sang in the choirs of the churches she attended, Faith United Methodist and later Aldersgate Free Methodist church. She was frequently a featured soloist on special Sunday morning worship services. In addition, she was proud to be a member of the ‘Quakerettes Quartet’ performing for various gatherings throughout Central Indiana. In her later years Barbara was an avid reader and dabbled in writing poetry for special occasions. Anyone receiving a letter from Barbara could count on the envelope being adorned with an appropriate image cut from a magazine or greeting card. Upon Hugh’s retirement she and Hugh made Ruskin, Florida their residence until his death. They were ‘snowbirds’ for those many years, enjoying the good weather in each of the two states. Visitation will be held on Friday, February 7, 2020, from 5:00 p.m. until 8:00 p.m. at Erlewein Mortuary & Crematory, 1484 W. US Hwy. 40, Greenfield, IN 46140. A funeral service will be held on Saturday, February 8, 2020, at 10:00 a.m. at the mortuary. Pastor John VanValin will be officiating. Interment will follow at Park Cemetery, Greenfield, Indiana. In lieu of flowers, memorial contributions may be made to the donor’s choice of charity. You may express condolences or share a memory of Barbara at www.erleweinmortuary.com.

SHELBYVILLE - Barbara Lee (Walker) Leary, 93, of Shelbyville, IN passed away January 27, 2020 at Cypress Run Health Care in Morristown, IN. She was born January 30, 1926, in Greenfield, Indiana, the daughter of Carl Alfred Walker and Gertrude... View Obituary & Service Information

The family of Barbara Lee Leary created this Life Tributes page to make it easy to share your memories.