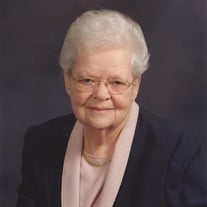 GREENFIELD - Wilma Mae (Carpenter) Dunn, 86, went to be with the Lord on April 9, 2019, in Greenfield, Indiana. She was born at home on October 26, 1932, in Newberry, Indiana, to Kenneth and Eathel Carpenter. Wilma attended Frankfort Pilgrim College for three years where she met John Dunn. While attending college, she worked for the Pilgrim Publishing House and Detroit Steel in Indianapolis. Wilma and John were married 64 years ago in the Pilgrim Holiness church in Linton, Indiana, on July 30, 1954. After graduating from Frankfort Pilgrim College in Frankfort, Indiana, they entered pastoral ministry leading Pilgrim Holiness Churches in Fond de lac, Wisconsin; Hillsboro, Wisconsin; and Wesleyan Churches in Phoenix, Arizona; and in Tucson, Arizona. In 1975, their family of eight moved back to Indiana when John became the Executive Leader of the Wesleyan Investment Foundation for 25 years until retirement in 2000. Because of John’s position, he and Wilma were blessed to visit churches and pastors across the United States as well as in Canada, Europe, Peru, Australia, Puerto Rico, Haiti, the Philippines, Israel, and New Zealand. Wilma leaves a legacy of impacting others for her Lord, beginning with her family in which she instilled godly values, lifestyle, and a heart for representing Jesus Christ in all things. She invested time in family devotions and praying for each child, grandchild, and great-grandchild by name every day. She is preceded in death by a son, Glenn Arthur Dunn, a daughter-in-law, Melinda (Cartwright) Dunn, her parents, two sisters, Luella Carpenter and Mary Snyder, a brother, Delbert. She is survived by her husband, John A. Dunn of Greenfield, a sister, Deloris Cundiff of Washington, IN, and brother, Kenneth Carpenter, Jr. of Bloomfield, IN, and five children: Charissa Dunn of Bartlesville, Oklahoma, Daniel and DiAnn (Ware) Dunn of Chesterton, Indiana, Kristeen Walker of McCordsville, Indiana, Craig and Tammy (Miller) Dunn of Fishers, Indiana, Glenn’s widow, Rhonda (Hendricks) Dunn of Derby, Kansas, and James and Wendy (Agner) Dunn of McCordsville, Indiana, along with 13 grandchildren and 12 great-grandchildren. A celebration of Wilma’s life and our Lord will be at 10:30 a.m. Saturday, April 13, 2019 at the Brown’s Chapel Wesleyan Church, 994 N. 600 E., Greenfield, IN 46140. The family will greet guests at the church on Friday from 4:00 p.m. to 7:00 p.m. as well as from 9:30 a.m. to 10:30 a.m. on Saturday. Interment will be at Park Cemetery in Greenfield, Indiana. Erlewein Mortuary in Greenfield, Indiana is handling arrangements. Memories and greetings can be posted at www.erleweinmortuary.com. In lieu of flowers, friends are encouraged to make a donation to Brown’s Chapel Wesleyan Church or to the church of their choice in Wilma’s honor.

GREENFIELD - Wilma Mae (Carpenter) Dunn, 86, went to be with the Lord on April 9, 2019, in Greenfield, Indiana. She was born at home on October 26, 1932, in Newberry, Indiana, to Kenneth and Eathel Carpenter. Wilma attended Frankfort Pilgrim... View Obituary & Service Information

The family of Wilma Mae Dunn created this Life Tributes page to make it easy to share your memories.