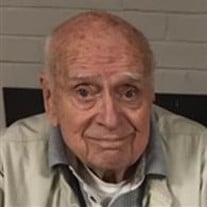 GREENFIELD - William “Bill” Clyde Walker, age 96, of Greenfield, passed away Sunday, February 7, 2021. He was born in Hancock County on August 2, 1924 to George W. and Martha E. (Butcher) Walker. He graduated from Eden High School in 1942. He served in the 362nd Infantry of the Army during World War II. He was a highly decorated veteran having received the Theater Ribbon with bronze star and the Purple Heart with oak leaf cluster. Upon his return from the war, he met and married Vivian (Snider) Walker on December 2, 1946. Bill worked for Delco Remy/General Motors as a steel cutter for many years before retiring in 1982. He was a member of the Oddfellows in Delaware County and the American Legion in Greenfield. He enjoyed fishing, camping, and playing cards. He is survived by his loving wife, Vivian Walker; children, Joyce (Danny) Derrick, Marilyn Hinkle, Kenny (Sue) Walker, Byron (Caroline) Walker, Amy (Alan) Hodgkin; 6 grandchildren; 14 great-grandchildren; and 2 great great-grandchildren. He was preceded in death by his parents; sister, Ruth Ann Smith; and niece, Beth Ann Harvey. A private committal will take place at Park Cemetery. Arrangements are being handled by Erlewein Mortuary & Crematory in Greenfield In lieu of flowers, memorial contributions may be made by mail to the Greenfield Veterans Honor Guard, 2302 W. Stone Ridge Trail, Greenfield, IN 46140 or to the Special Olympics Indiana, 6200 Technology Center Drive, Suite 105, Indianapolis, IN 46278. Friends may share a memory or condolence at www.erleweinmortuary.com.

The family of William "Bill" Walker created this Life Tributes page to make it easy to share your memories.