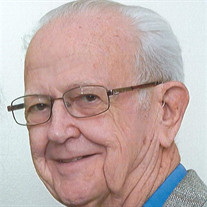 William (Bill) Edward Stevens passed away December 27, 2019, at the age of 90. He was born March 18, 1929, near Buffalo, MO to William and Esther (Egleston) Stevens. The Family moved to Pilot Grove, MO, in 1934. Bill graduated from Pilot Grove High School. He owned Stevens Appliances in Booneville, MO, for several years. After selling his store, he was employed as a Field Technician for the Baldwin Piano & Organ Co. in Cincinnati, OH, and Fayetteville, AR, from 1959 to 1975. He then was owner of Stevens Custom Organ Co. in Fayetteville, AR, from 1975 until 2003, when he retired. Bill had a natural gift for electronics and was very respected in his field. It was his career and hobby. He was also known for designing and building sound systems. His faith was in a nondenominational Christian home-based fellowship. He enjoyed reading his Bible and visiting with special friends and relatives about faith and hope in God. He is survived by his wife Deanna L. (Amerine) Stevens to whom he married in Independence, KS on July 7, 1967, and she survives at the home. He is also survived by their two children: Sara L. Brown (Eric) of McCordsville, IN and Alan W. Stevens, of New Bloomfield, MO. Their five grandchildren: Evan Brown and Alyssa Brown of McCordsville, IN, and Ella Stevens, Luca Stevens, and Rawley Stevens of New Bloomfield, MO. One brother-in-law: Mark Amerine of Independence, KS, and several nieces and nephews, who were very dear to him, and many friends. He was preceded in death by his parents, brothers Frank Stevens and Robert Stevens, and sisters Francis Stevens, Helen (Stevens) Wilhoit and Dorothy (Stevens) Wilhoit. Visitation will be held on Monday, December 30, 2019, from 5:00 pm until 7:00 pm at Erlewein Mortuary & Crematory, 1484 W. US Hwy. 40, Greenfield, IN 46140 with a funeral service at 7:00 pm. A private family burial will take place on a later date. In lieu of flowers: Suburban Hospice.

William (Bill) Edward Stevens passed away December 27, 2019, at the age of 90. He was born March 18, 1929, near Buffalo, MO to William and Esther (Egleston) Stevens. The Family moved to Pilot Grove, MO, in 1934. Bill graduated from Pilot Grove... View Obituary & Service Information

The family of William "Bill" Stevens created this Life Tributes page to make it easy to share your memories.