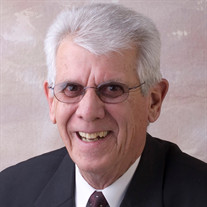 CARMEL – William E. Cole, age 82, of Carmel, passed away on Friday, April 19, 2019 at St. Vincent Hospice. He was born in South Bend, Indiana on September 20, 1936 to James E. and Sophie (Thaldorf) Cole. He graduated from South Bend Central High School in 1955 and received his associates in 1957 from Worsham College of Mortuary Science in Chicago. He served in the U.S. Army and the Army Reserves. Bill married Janet C. (Cass) on October 12, 1957 in South Bend. He was a funeral director from 1957 until 2006. During those years he owned and operated Cole Funeral Home in Chesterton, IN from 1961-1970 and also owned and operated Cole Funeral Home in Winamac, IN from 1974-1980. He most recently managed Hughes Funeral Home now Erlewein Mortuary in Fortville. Bill also was a family assistant for Erlewein Mortuary from 2006 until 2014. He was the past president of Fortville Lions Club and a member of New Hope Presbyterian Church in Fishers. Bill was a member of the Indiana Funeral Directors Association and Marion County Funeral Directors. He was a 50 year mason and most recently a member of the Fortville Masonic Lodge #207. Bill enjoyed fishing, gardening, and was a fan of Colts football, I.U., and Notre Dame sports. Bill is survived by his wife, Janet Cole of Carmel; son, Dan (Jennifer) Cole of Carmel; daughters, Amy Lawrence of La Porte and Julie (Mike) Good of Plymouth; 12 grandchildren; 3 great-grandchildren; and a brother, Dr. James Cole of Bloomington, Minnesota. He was preceded in death by his parents, James and Sophie Cole; son, Timothy Cole; and daughter, Carrie Fogleman. Visitation will be held on Saturday, May 4, 2019, from 10:00 a.m. until 11:00 a.m. at New Hope Presbyterian Church, 12550 Brooks School Rd, Fishers, IN 46037. A memorial service will take place immediately following the visitation at 11:00 a.m. Pastor Jennifer Lipinski will be officiating. Burial will take place at a later date at Pine Lake Cemetery in La Porte. In lieu of flowers, memorial contributions may be made by mail to New Hope Presbyterian Church, 12550 Brooks School Rd, Fishers, IN 46037 or Hospice within the St. Vincent Foundation, 8402 Harcourt Road, Suite 210, Indianapolis, IN 46260. Envelopes will be available at the church. Friends may share a memory or a condolence at www.erleweinmortuary.com. Arrangements are being handled by Erlewein Mortuary & Crematory in Greenfield.

The family of William "Bill" Cole created this Life Tributes page to make it easy to share your memories.