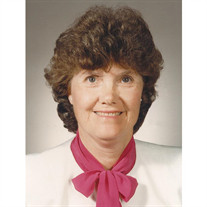 GEORGETOWN, INDIANA - Virginia (Ginny) Rihm, 90, ended this journey peacefully on September 14th, 2021. Born on an Easter Sunday on April 7th, 1931; the second of 8 children. Her lifetime has been a testament to the true grit a woman raised in depression era America had to develop to survive; though personally and professionally she made it a point to thrive. Ginny was a pioneer of women in the workplace. She started at RCA Victor in Indianapolis, Indiana in 1949. Soon after becoming a line supervisor at RCA, she moved onto Civil Service work and exceled in what is now computer/computing and the programming and support of those old jalopies developed to crunch numbers quicker than humans. Virginia never looked back and was a boss over her entire professional adventure which ended in retirement at the Naval Avionics Facility in Indianapolis, Indiana. Learning was a lifelong pursuit and passion culminating in a Bachelor Of Sciences in Adult Studies degree achieved later than most in Virginia’s long life – this was to prove to her, and the world, that a depression era high school dropout would not be defined by choices forced on her at the young age of 18 by life and family circumstances. Virginia loved and survived two great husbands, Clyde Anderson, Jr and Harold Rihm. Clyde, who passed in 1981, took her to live in California, and Harold, who passed in 2018, took her to live in Florida and traveled the world with her; but all that travel, and adventure, always lead Ginny back to Indiana. Her pride and joy were her children and stepchildren; John (Beth) Anderson, Theresa (Jay) Sheppard, Mary Sinnott, John (Patricia) Rihm, Mark (Peggy) Rihm and Ann (Phil) Idlewine. And of course, grand and step grandchildren; Zaccary (Kendra) Sheppard, Andrew Anderson, Aria Anderson, Ashley Gardner, Alicia Haydon, Alexis (Jennifer) Henry, Kyle (Cynthia) Haynes, Michael (Lauren) Sinnott, Joseph (Tasha) Rihm, Timothy Sinnott, Katelyn Rihm, and Joshua and Paul Rihm. Survived by all the above as well as her siblings David (Lee) Stearns, Ann (Paul) Wright, Michael (Mary) Stearns; and countless beloved great and great-great grandchildren, nephews, nieces, in-laws, friends. Virginia was preceded by her parents, Bertha and Ezra Stearns, Doug (Dorothy) Stearns, Betty (Jim) Bence, Kenneth (Ginny) Stearns, and Clifford (Sue) Stearns. Virginia’s next journey will begin with a graveside service on Saturday, September 18, 2021, at 10:00 a.m. at Glen Cove Cemetery, 8955 McCullum, Knightstown, IN 46148. Father Aaron Jenkins will be officiating. Arrangements are being handled by Erlewein Mortuary & Crematory in Greenfield. In lieu of flowers, memorial contributions may be made to the Alzheimer’s Association, by website at https://act.alz.org/. Friends may share a memory or condolence at www.erleweinmortuary.com.

GEORGETOWN, INDIANA - Virginia (Ginny) Rihm, 90, ended this journey peacefully on September 14th, 2021. Born on an Easter Sunday on April 7th, 1931; the second of 8 children. Her lifetime has been a testament to the true grit a woman raised... View Obituary & Service Information

The family of Virginia Rihm created this Life Tributes page to make it easy to share your memories.