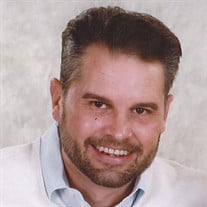 Travis Allen Jonas, age 45, of Greenwood, passed away on Friday, March 5, 2021. He was born in Indianapolis on March 26, 1975 to Jerry W. and Gloria (Sizemore) Jonas. He graduated from Morristown Jr./Sr. High School in 1993 and from Purdue University in 1997 with a degree in Mechanical Engineering Technology. He was a member of Sigma Chi Fraternity. Travis was a true Poly-Math. He was an expert at systems engineering, mechanics, aerodynamics, hypersonics, and computer-aided engineering. He began his career at Metalex Manufacturing in Ohio, designing and building parts for the Space Shuttle. He joined Gencorp Aerojet in California in 2001 and worked on multiple programs, such as the Airborne Laser, NERVA, and Upper Stage Engine Technology (USET) program. In 2007, Travis returned to Indiana and joined Rolls Royce/Liberty Works. He again worked on the USET program, hypersonic programs amongst other classified projects. In July 2011, Travis joined Mechanical Solutions, Inc. as Manager of Turbomachinery Design. He worked on a wide variety of projects, such as a Department of Energy funded hydroturbine, Radon fan, environmentally friendly residential air conditioner and heat pump, an oxidizer turbopump for a commercial rocket, and a revolutionary pediatric heart pump. Travis not only provided the mechanical designs for these programs, but he managed them with an expertise seldom encountered. He additionally served as an adjunct technical engineer for an Aerospace course at Purdue University. He jointly lectured specialty courses in Rocket Turbopump Design and analysis, as well as a Professional Course in Computational Fluid Dynamics at the Texas A&M Turbomachinery Symposium. He authored multiple turbomachinery related publications for AIAA, ASME, Joint Army Navy NASA Air Force (JANNNAF), and Nuclear applications. Travis received NASA’s Space Flight Awareness (SFA) Award in 2000 for his contribution in the development of the Space Shuttle’s High Pressure Fuel Turbopump/Alternate Turbopump (HPFTP/AT). The SFA is considered one of the highest awards presented to NASA and/or significant industry partners related to the human space flight program. Travis was recognized as an international expert in turbomachinery. His work was respected in the United States, Europe, Australia, and India. The engineering contributions of Travis Jonas will be recognized for many years. Engineers of his magnitude come around once in a lifetime. Travis was full of life and had a spectacular sense of humor. He enjoyed adventures with his dedicated friends and quality time with his family. Travis had a special connection with his horse and cats. He played the saxophone and piano and loved watching Drum Corps International competitions. He also enjoyed almost anything related to cars— especially the Indy 500 and NASCAR and his mom’s home cooking. He is survived by his mother Gloria Jonas of Fountaintown; daughter Ashley Jonas of Cincinnati, Ohio; sister Tricia Hackleman (Jeff) and nieces Claire and Paige of Bishop, Georgia; and loving partner Kelly Smith and her daughters Marin and Maeve of Greenwood. He was preceded in death by his father Jerry W. Jonas. Visitation will be held from 11:00 a.m. until 2:00 p.m. on Saturday, March 13, 2021 at Erlewein Mortuary & Crematory, 1484 W. US Hwy. 40, Greenfield, IN 46140 with a funeral service following the visitation at 2 p.m. Pastor Colin Cress will be officiating. Burial will follow at New Palestine Cemetery in New Palestine, Indiana. As a reminder, the government mandate requires guests to wear masks when inside our building. We must limit the number of guests at a time and please practice social distancing. In lieu of flowers, memorial contributions may be made to www.fontanbloodpump.com by clicking the “DONATE” button. The Fontan pump will contribute to the quality of life for many children born with heart defects. Travis made outstanding contributions to this program, and his tireless efforts assisted in achieving a major National Institute of Health (NIH) Grant to continue and finalize its development. Contributions may also be made to the Fairview United Methodist Church, 1880 W 900 N, Fountaintown, IN 46130. Friends may share a memory or condolence at www.erleweinmortuary.com.

Travis Allen Jonas, age 45, of Greenwood, passed away on Friday, March 5, 2021. He was born in Indianapolis on March 26, 1975 to Jerry W. and Gloria (Sizemore) Jonas. He graduated from Morristown Jr./Sr. High School in 1993 and from Purdue University... View Obituary & Service Information

The family of Travis Jonas created this Life Tributes page to make it easy to share your memories.

Travis Allen Jonas, age 45, of Greenwood, passed away on Friday,...