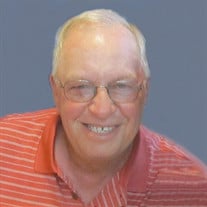 MORRISTOWN – Tommy D. “Tom” Everhart, age 72, of Morristown, passed away on Thursday, December 20, 2018 at Morristown Manor. He was born in Indianapolis on November 4, 1946 to Harold L. and Shirley M. (Cory) Everhart. Tom graduated from Morristown High School in 1964 and attended Purdue University. On July 17, 1965, he married Cheryl D. Rogers in Morristown. Tom was a lifetime farmer in Shelby, Hancock, and Rush counties. He was a member of Morristown United Methodist Church. Since he was a teenager, he was a member of Eastern Indiana District Tractor Puller Association. He was also a member of the Shelby Eastern School Board for 12 years, Soil Water Conservation District for over 20 years, and Hoosier Heartland. Tom enjoyed pulling tractors and playing and coaching basketball. He was an avid Purdue and Morristown High School basketball fan. He played in a recreational basketball league for many years and also was an assistant coach at Morristown, Rushville, Greenfield, and Indian Creek. In the early 2000s, he ran a detasseling crew for Pioneer Seed in Rushville. Tom is survived by his wife, Cheryl Everhart; children, Lisa (Julie Lang) Myers and Erin (Scott) Needham; four grandchildren, Thomas Myers, Olivia Needham, Gabrielle Needham, and Brynn Needham; brother, Teddy (Jana) Everhart; and mother-in-law, Ione Rogers. He was preceded in death by his parents, Harold and Shirley Everhart. Visitation will be held on Sunday, December 23, 2018, from 2:00 p.m. until 6:00 p.m. at Erlewein Mortuary & Crematory, 1484 W. US Hwy. 40, Greenfield, IN 46140. A funeral service will be held on Monday, December 24, 2018, at 10:00 a.m. at Morristown United Methodist Church, 221 S. Washington Street, Morristown, IN 46161. Pastor Chris Dourson will be officiating. Burial will follow at Asbury Cemetery in Morristown. Memorial contributions may be made by mail to The Association for Frontotemporal Degeneration, Radnor Station Building 2, Suite 320, 290 King of Prussia Road, Radnor, PA 19087, by website at theaftd.org or to Morristown UMC, 221 S. Washington Street, Morristown, IN 46161. Envelopes will be available at the mortuary and church. Friends may share a memory or a condolence at www.erleweinmortuary.com.

The family of Tommy "Tom" Everhart created this Life Tributes page to make it easy to share your memories.