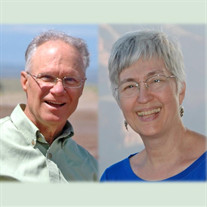 GREENFIELD - Thomas Wolfe, age 71, and Mary Lynn (Medearis) Wolfe, age 70, of Greenfield, passed away on Friday, April 27, 2018 in Kalkaska, Michigan. Tom was born on March 21, 1947 in Terre Haute, Indiana, as the son of Walter and Dorcas Anne (Fink) Wolfe. Mary Lynn was born on October 11, 1947 in Slaton, Texas, as the daughter of Dale and Mildred (Swenson) Medearis. The two were married in 1973. Mary Lynn graduated with a bachelor’s degree from Purdue University in 1972, studied music history at Butler University, and earned a Medical Doctorate in the Indiana University School of Medicine in 1992. She continued her medical training in the Indiana University School of Medicine Department of Radiology, including a fellowship in neuroradiology, completing her training in 1997. Mary Lynn practiced radiology with Irvington Radiologists and was the chief of radiology at Hancock Regional Hospital, retiring in 2013. Tom was proud to have achieved the rank of Eagle Scout in the Boy Scouts of America. After receiving a bachelor’s degree from Purdue University in 1969, he earned his Medical Doctorate in the Indiana University School of Medicine in 1974. He completed his medical training in 1978 in the Indiana University School of Medicine Department of Anesthesiology, including a fellowship in pediatric anesthesiology. Tom enjoyed his career as a highly respected teaching physician in the Department of Anesthesiology at Riley Hospital for Children. He also retired in 2013. Both Tom and Mary Lynn were consummate hobbyists. Tom was a dedicated pilot, building several of his own planes, and an active member of the EAA Chapter 1121 in Greenfield. He was also passionate about forestry and enjoyed working his tree farm and woods, dog Lexi by his side. Mary Lynn loved music. She played the piano and was active in two local handbell choirs. Mary Lynn had an ever-expanding list of leisure pursuits, from sewing, knitting, and quilting to doll making and ribbon embroidery. She also loved planning elaborate trips, especially in their RV. Above all, they treasured hosting friends and family at Sunday brunches, birthdays, and Thanksgiving and Christmas parties at their Greenfield home. Tom and Mary Lynn are survived by their sons, Gregory Wolfe, of Indianapolis; John (Tracy) Wolfe, of Carmel; and Jason (Veronica Vela) Wolfe, of Indianapolis. Mary Lynn is survived by her mother, Mildred (Swenson) Medearis, of Greenfield; sister, Linda (Bob) Perry, of Oregon; and brother, Robert (Anne) Medearis, of Greenfield. Tom is survived by his sister, Janet Wolfe, of New Palestine; sister, Anne (Robert) Medearis, of Greenfield; and sister-in-law, Renate Wolfe, of Greenfield. Tom and Mary Lynn are also survived by their three grandchildren, Alancin, Nathan, and Sophia Wolfe; and five nieces and nephews, Tesa, Lea, Ian, Andrew, and Shelby. Mary Lynn was preceded in death by her father, Dale Medearis. Tom was preceded in death by his parents, Walter and Dorcas Wolfe; and his brother, David Wolfe. Visitation will be held on Tuesday, May 8, 2018 from 4:00 p.m. until 8:00 p.m. at Erlewein Mortuary & Crematory, 1484 W. US Hwy. 40, Greenfield, IN 46140. A private Celebration of Life event will be held at a later date. In lieu of flowers, the family requests that memorial contributions be made to one of several organizations which were meaningful to Tom and Mary Lynn. These include the Harpoon Restoration & Museum at the Indianapolis Regional Airport (www.AMHF.org); the IUF-Wolfe Pediatric Anesthesia Education Fund, administered by the IU Foundation, PO Box 7072, Indianapolis, IN 46207-7072; or the music programs of the Cross of Grace Lutheran Church (3519 S. 600 W., New Palestine, IN 46163) and Old Bethel United Methodist Church (7995 E. 21st Street, Indianapolis, IN 46219). Envelopes will be available at the mortuary. Friends may share a memory or a condolence at www.erleweinmortuary.com.

The family of Thomas & Mary Lynn (Medearis) Wolfe created this Life Tributes page to make it easy to share your memories.