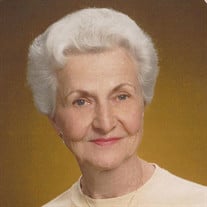 GREENFIELD - Thelma “Mam” Peterson, age 96, of Greenfield, passed away Thursday, July 1, 2021. She was born in Clarksburg, IN on July 16, 1924 to Elmer Allen and Jessie (Bentley) Lewis Dorsey. She lived in Davie, FL as a child, moved to Fortville, IN in 1937, and then to Waukegan, IL in 1938. She graduated from Waukegan Township High School in 1941. In 1944, she moved to Indiana and married John Robert Peterson in Fortville on May 26, 1945. She worked as a Secretary for Allstate 30 years before retiring in 1994. Mrs. Peterson became a member of South Street – Trinity Park UMC in 1952 and maintained her membership since that time. In addition, she was a member of WSCS, UMW, Jessie Dorsey Circle, Eden Chapter #101 OES, and Elks Women’s Auxillary. Thelma enjoyed driving to area nursing homes until she was 95 years old. She delivered copies of Sunday sermons and homemade cookies to the many residents that had been lifelong friends and fellow members of Trinity Park United Methodist Church. This was her ministry. She also enjoyed preparing meals at the church, counting the offering every Sunday, and cleaning the pews. Thelma was an avid sports fan-often yelling at the TV pacing. She enjoyed attending her grandsons and great grandchildren’s sporting activities and events. She is survived by her daughter, Linda L. Burkhart of Greenfield; grandsons Brad (Renee), Brett (Janelle), and Brian (Mary); and great-grandchildren Brandyn (Jacqueline), Bryce, Ryley (David), Reece, Sydney, and Hannah. She was preceded in death by her parents, Elmer and Jessie; step-father, Bill Dorsey; husband, J. Robert Peterson; son-in-law, Jerry Burkhart; and siblings, Bernard Lewis, Mary Rose Rees, Howard Lewis, and Charles Lewis. Visitation will be held on Saturday, July 10, 2021 from 10:00am to 12:00pm at Trinity Park United Methodist Church, 207 W. Park Ave., Greenfield, IN 46140. A funeral service will immediately follow visitation at 12:00pm with Mike Manning and Larry Van Camp officiating. Burial will follow at Park Cemetery in Greenfield, 621 S. State. St., Greenfield, IN 46140 Memorial contributions may be made by mail to Trinity Park United Methodist Church, 207 W. Park Ave., Greenfield, IN 46140 or envelopes will be available at the church. Friends may share a memory or condolence at www.erleweinmortuary.com. Arrangements are being handled by Erlewein Mortuary & Crematory in Greenfield.

The family of Thelma Peterson created this Life Tributes page to make it easy to share your memories.