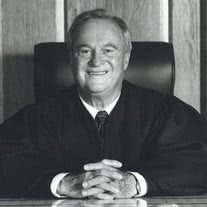 GREENFIELD – The Honorable Ronald L. Gottschalk, age 81, of Greenfield, passed away on Saturday, March 2, 2019. He was born in Bunker Hill, Indiana on February 26, 1938 to Robert L. and Marjorie (Nichols) Gottschalk. He graduated from Clay Township High School in 1955. Ron received his undergraduate degree from Indiana University in 1959 and obtained his Doctor of Jurisprudence degree from I.U. School of Law Indianapolis in 1969. From 1959-1969 he worked as claims adjuster for Travelers Insurance Company while attending Law School. After graduation he joined the law firm of Shake and Lewis in Vincennes, IN. In 1972 then Governor Otis Bowen appointed Ron to serve as the first judge of the newly created Hancock County Small Claims Court. In 1979 he ran for and was elected judge of the Hancock County Circuit Court where he served until his retirement in 1999. Ron was a member of Bradley United Methodist Church, the Indiana and Hancock County Bar Associations, the Hancock County FOP and the Indiana Sporting Clay Association. He was an avid outdoorsman and loved golfing, hunting, fishing, and shooting sporting clays. After retiring, he enjoyed extensive travel with his wife, Teri. Participating in sporting clay tournaments around the country with his shooting buddies was a source of great enjoyment and camaraderie. He will be greatly missed by his family, friends, and devoted dogs, Sophie and Hunter, who were his constant companions when he became homebound. The family appreciates the friends who called and visited with Ron at home, he loved you all. Special thanks to his extraordinary caregivers Tom and Jeff, Dr. Tom O’Connor, his wonderful nurse Lee, and the entire staff of Hancock Hospice. Ron is survived by his wife, Teri House Gottschalk of Greenfield; daughters, Lynn Gottschalk of Fishers, Lindsey House of Manchester, New Hampshire and Sarah House of Walvis Bay, Namibia; sons, Nicholas House and Spencer House of Indianapolis; four grandchildren, Lyla Gottschalk, Logan Gottschalk, McKinley House, and Charlotte Matyayi. He was preceded in death by his parents, Robert and Marjorie Gottschalk; and son, Dr. Robert “Bob” Gottschalk. Visitation will be held on Friday, March 8, 2019, from 4:00 p.m. until 8:00 p.m. at Erlewein Mortuary & Crematory, 1484 W. US Hwy. 40, Greenfield, IN 46140. A funeral service will be held on Saturday, March 9, 2019, at 1:00 p.m. with viewing from 11:00 a.m. until 1:00 p.m. at Bradley United Methodist Church, 210 W. Main St., Greenfield, IN 46140. Rev. David Scifres and Ted Nichols will be officiating. Burial to follow at Park Cemetery in Greenfield. In lieu of flowers, memorial contributions may be made by mail to the Hancock Regional Hospital Foundation - Hospice, 801 N. State Street, Greenfield, IN 46140 or Bradley United Methodist Church Endowment Trust Fund, 312 East Main Street, Greenfield, Indiana 46140. Envelopes will be available at the mortuary and church. Friends may share a memory or a condolence at www.erleweinmortuary.com.

GREENFIELD &#8211; The Honorable Ronald L. Gottschalk, age 81, of Greenfield, passed away on Saturday, March 2, 2019. He was born in Bunker Hill, Indiana on February 26, 1938 to Robert L. and Marjorie (Nichols) Gottschalk. He graduated from... View Obituary & Service Information

The family of The Honorable Ronald L. Gottschalk created this Life Tributes page to make it easy to share your memories.