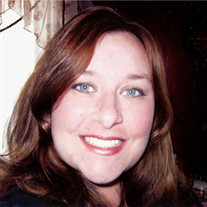 NEW PALESTINE – Susan E. (Acsbok) Hartlerode, age 43, of New Palestine, passed away Friday, February 16, 2018, at IU Methodist. She was born on September 26, 1974 in Crown Point as the daughter of Barry Acsbok and Marsha Benedek. She attended Hobart High School before receiving her Bachelor’s Degree at Purdue University in May of 1998. She received her Master’s Degree from California State University in May of 2009. She married Jack E. Hartlerode on May 22, 1999 in Hobart, IN. She worked as a Speech Language Pathologist and was a Certified Brain Injury Specialist. Susan was a member of the Indiana Speech-Language-Hearing Association and the American Speech-Language-Hearing Association. She was very proud of her Master’s and Certificate of Clinical Competence for Speech-Language Pathologists. She was also an adult leader of Indiana Job’s Daughters, Bethel #67 in Greenfield. Susan is survived by her husband, Jack Hartlerode of New Palestine; daughters, Jillian and Ava Hartlerode, also of New Palestine; brother, Michael Acsbok of Zionsville; sister, Ann Marie Burns of Fort Wayne; mother, Marsha Benedek of Hobart; and several cousins. She was preceded in death by her father, Barry Acsbok; and her grandparents. Visitation will be held on Friday, February 23, 2018, from 3:00 p.m. until 6:00 p.m. at Erlewein Mortuary & Crematory, 1484 W. US Hwy. 40, Greenfield, IN 46140. A funeral service will be held immediately following visitation at 6:00 p.m. also at the mortuary. Lieutenant Commander Gregg Peters will be officiating. In lieu of flowers, memorial contributions may be made to the Brain Injury Association of Indiana by website at https://biaindiana.org/donate/, or envelopes will be available at the mortuary. Friends may share a memory or a condolence at www.erleweinmortuary.com.

NEW PALESTINE &#8211; Susan E. (Acsbok) Hartlerode, age 43, of New Palestine, passed away Friday, February 16, 2018, at IU Methodist. She was born on September 26, 1974 in Crown Point as the daughter of Barry Acsbok and Marsha Benedek. She... View Obituary & Service Information

The family of Susan Elizabeth Hartlerode created this Life Tributes page to make it easy to share your memories.