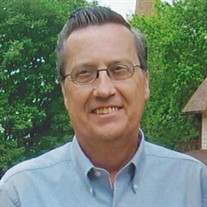 GREENFIELD – Stephen Michael Cooper, age 68, of Greenfield, passed away Monday, January 24, 2022 at Hancock Regional Hospital. He was born in Indianapolis on February 20, 1953 to Frank Cooper and JoAnne (Moffatt) Cooper. He was a 1970 graduate of John Marshall High School in Indianapolis and attended IUPUI. On February 26, 1982, Stephen married Maureen Hull in Indianapolis. He was the co-owner of COOR Consulting and Land Services in Knightstown for 23 years. He was the current president of the Greenfield City Planning Commission and served as past president of the Indianapolis Eastside Rotary Club. Stephen enjoyed fishing, traveling, and watching IU basketball, the Reds, and the Colts. He loved spending time with his family and being Pappo to his grandchildren. Stephen is survived by his loving wife of 39 years, Maureen Cooper of Greenfield; children, Andrea (Alex) Meza of Greenwood, Jon (Ivy) Riester of Lafayette, Jennifer (Paul) Hudson of Greenfield, and Christopher (Kristin) Cooper of Greenfield; and grandchildren, Elaine, Claire, William, Remy, Alexander, Rory, Giana, and Brynlee. He was preceded in death by his parents, Frank and JoAnne Cooper; brother, Jeff Cooper; sister, Lisa Parker; and sister-in-law, Pam Cooper. Visitation will be held on Saturday, January 29, 2022, from 10:00 a.m. until 2:00 p.m. at Erlewein Mortuary & Crematory, 1484 W. US Hwy. 40, Greenfield, IN 46140. A funeral service will begin at 2:00 p.m. Burial will follow at Park Cemetery in Greenfield. In lieu of flowers, memorial contributions may be made by mail to the Hancock County Boys & Girls Club, 715 E Lincoln St, Greenfield, IN 46140, or envelopes will be available at the mortuary. Friends may share a memory or condolence at www.erleweinmortuary.com.

GREENFIELD &#8211; Stephen Michael Cooper, age 68, of Greenfield, passed away Monday, January 24, 2022 at Hancock Regional Hospital. He was born in Indianapolis on February 20, 1953 to Frank Cooper and JoAnne (Moffatt) Cooper. He was a 1970... View Obituary & Service Information

The family of Stephen Cooper created this Life Tributes page to make it easy to share your memories.