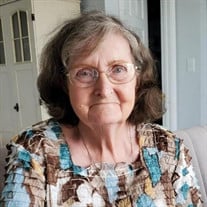 GREENFIELD – Sherry Lorraine (McKeeman) VanDuyn, age 77, of Greenfield, passed away Tuesday, March 22, 2022. She was born in Indianapolis on January 16, 1945 to Max McKeeman and June (Parks) McKeeman. She was a 1963 graduate of Charlottesville High School. On June 1, 1963, Sherry married Thomas “Tom” Mirl VanDuyn at Charlottesville Friends Church. She was a member at Eden United Methodist Church and Willow Branch United Methodist Church as well as the Hancock County Historical Society and many quilting clubs. She was admired for her talent in quilting and hand-made teddy bears, which were works of art she custom-created for family and friends. She participated in many quilting clubs and competitions, including Riley Days. Her achievements were numerous, yet she remained humble and took pride in her family, rather than herself. She was known for her honesty and sincerity. Though her demeanor was quiet, her spirit was strong, and her love was genuine. Sherry is survived by her husband of 58 years, Tom VanDuyn; children, Renae VanDuyn (Joseph R. Prout), David Thomas VanDuyn, Rachel Lynn VanDuyn, and Daniel Todd VanDuyn (Amy); 7 grandchildren; 1 great-grandchild; siblings, Darla and Vicki McKeeman; and her dogs, Beau and Midnight. She was preceded in death by her parents, Max and June McKeeman; sister, Michelle McKeeman; and brother, Michael McKeeman. Visitation will be held on Friday, March 25, 2022, from 5:00 p.m. until 8:00 p.m. at Erlewein Mortuary & Crematory, 1484 W. US Hwy. 40, Greenfield, IN 46140. A funeral service will be held at the mortuary on Saturday, March 26, 2022, at 10:00 a.m. with viewing 1 hour prior to the service. Burial will follow at Harlan Cemetery in Wilkinson. Friends may share a memory or condolence at www.erleweinmortuary.com.

GREENFIELD &#8211; Sherry Lorraine (McKeeman) VanDuyn, age 77, of Greenfield, passed away Tuesday, March 22, 2022. She was born in Indianapolis on January 16, 1945 to Max McKeeman and June (Parks) McKeeman. She was a 1963 graduate of Charlottesville... View Obituary & Service Information

The family of Sherry VanDuyn created this Life Tributes page to make it easy to share your memories.