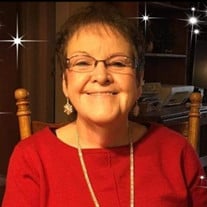 GREENFIELD – On Wednesday, December 4, 2019, Sharon Sue (Hunt) Hart, went to Heaven to be with the Lord. Sharon was born on August 11, 1947 in Indianapolis to Roy Hunt and Zelda (McDaniel) Hutton, and she graduated from New Palestine High School in 1965. She and her sweetheart, Gene, were married October 29, 1983. Sharon worked at Union Savings and Loan in Greenfield at the time of her passing and has been since October 1997. Sharon was a member of Bethel Baptist Church since 1973. She sang in the choir for many years and also taught toddler classes on occasion. Sharon and Gene were a part of the teens at Bethel when it was on Sixth Street. Sharon enjoyed reading, watching Hallmark movies, and listening to Southern Gospel music. Sharon and Gene also loved portraying Mr. and Mrs. Claus during the month of December. Sharon was a breast cancer survivor. She used her survival as a way to minister to other women facing this diagnosis. Sharon has never met a stranger. Simply put, “She loved with her whole heart.” Sharon is survived by her children, Bonnie Guzman of Greenfield, Kellie (J.R.) Fannin of Indianapolis, Rick (Missy) Wilcher of Greenfield, Randy (Julie) Hart of Florence, SC and Tammy (Doyle) Andis of Greenfield. She also leaves behind her cherished grandchildren, Tyler (Ashley) Wilcher, Dominique Guzman, Dylan (Kyara) Wilcher, Mya Wilcher, Danielle (Hayden) Harrington, Avery (Allie) Hart, Brayton Hart, Julia Andis, and Bryce Andis; great grandchildren, Conor Wilcher, Aiden Pifer, Amariya McDaniel; sisters, Jeri Neice and Sandy (Phil) Pifer; and her little dog, Sadie. She was preceded in death by her parents, Roy Hunt and Zelda Hutton; husband, Gene Hart; grandson, Austin Hart; and niece, Joni Tucher. A memorial gathering will be held on Thursday, December 12, 2019, from 2:00 p.m. until 7:00 p.m. at Bethel Baptist Church, 1610 S. State St., Greenfield, IN 46140. A celebration of life ceremony will take place following the gathering at 7:00 p.m. Dr. Randall Parker will be officiating. Memorial contributions may be made by mail to the Bethel Baptist Church, 1610 S. State St., Greenfield, IN 46140, or envelopes will be available at the church. Friends may share a memory or condolence at www.erleweinmortuary.com. Arrangements are being handled by Erlewein Mortuary & Crematory in Greenfield.

GREENFIELD &#8211; On Wednesday, December 4, 2019, Sharon Sue (Hunt) Hart, went to Heaven to be with the Lord. Sharon was born on August 11, 1947 in Indianapolis to Roy Hunt and Zelda (McDaniel) Hutton, and she graduated from New Palestine... View Obituary & Service Information

The family of Sharon Hart created this Life Tributes page to make it easy to share your memories.