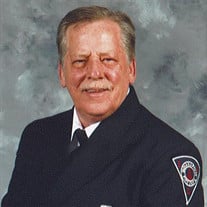 GREENFIELD – Scott Wayne Bixler, age 65, of Greenfield, passed away on Sunday, November 11, 2018 at his residence. He was born in Martinsville on January 24, 1953 to Frederick F. and Ina (Stephens) Bixler. Scott graduated from John Marshall High School in 1971 and served in the U.S. Army. He married Charlotte Kay (Lindsey) on December 11, 1976 in Indianapolis. Scott was a fireman and engineer with Indianapolis Fire Department Station’s #2 & #28 for over 30 years. He also worked for Rand McNally for 11 years. He was a member of Fireman’s Union Local #416 and the American Legion in Greenfield. Scott was an avid sports fan and enjoyed watching and cheering on the Colts, Pacers, Notre Dame, Cubs, IU and St. Louis Blues. He liked fishing, camping and loved spending time with his grandsons. Scott is survived by his wife, Charlotte Bixler of Greenfield; children, Aimee (Chris) Flodder of Knightstown and Tony (Carrie) Bixler of Greenfield; siblings, Steve (P.J.) Bixler of Indianapolis, Susie (Art) Hull of Danville, and Stan Bixler of Indianapolis; four grandsons, Robbie, Wyatt, Carter, and Nash; and mother and father-in-law, Billy and Betty Lindsey of Indianapolis. He was preceded in death by his parents, Frederick and Ina Bixler; and brother, Larry Bixler. A celebration of life gathering will be held on Thursday, November 15, 2018, from 3:00 p.m. until 7:00 p.m. at Erlewein Mortuary & Crematory, 1484 W. US Hwy. 40, Greenfield, IN 46140. In lieu of flowers, memorial contributions may be made by mail to the American Lung Association, 1200 Hosford Street, Suite 101 Hudson, WI 54016-9316, or envelopes will be available at the mortuary. Friends may share a memory or a condolence at www.erleweinmortuary.com.

GREENFIELD &#8211; Scott Wayne Bixler, age 65, of Greenfield, passed away on Sunday, November 11, 2018 at his residence. He was born in Martinsville on January 24, 1953 to Frederick F. and Ina (Stephens) Bixler. Scott graduated from John Marshall... View Obituary & Service Information

The family of Scott Wayne Bixler created this Life Tributes page to make it easy to share your memories.