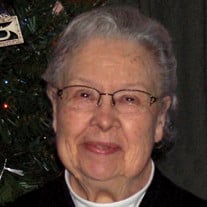 Sally Jean Stevens, 88, formerly of Greenfield, died on February 15, 2018 in Dayton, Ohio. Sally was born on July 25, 1929 in Columbia City, IN to Walter “Muzzy” and Helen Myers, she grew up as the eldest of three children. Sally graduated from Columbia City High School in 1947. After high school, she graduated from International Business College in Fort Wayne, IN and worked for several local businesses. Sally was very active in Delta Theta Tau Philanthropic Sorority where in 1952 she served as president of the local chapter. On August 10, 1957, she married Charles “Chuck” D. Stevens and moved to Greenfield, IN where Chuck worked as a Language Arts teacher. They had one child - Brian - in 1959. Sally worked in the school superintendent’s office before starting a career in personnel at Eli Lilly & Company - Greenfield Labs. If you came to work at Lilly, it was likely Sally that you first met. She retired from Lilly in 1993. When Chuck passed away in 2004, she volunteered at the Hancock County Public Library for ten years. Sally was known for her generosity, her stubbornness, her great sense of fun, quick laugh and love of family. She loved animals, especially dogs and particularly Basset Hounds. A practical joker, she annually swapped gag gifts with her brother, Frank. Sally and Chuck loved to travel, especially to the Great Smokey Mountains and North Carolina’s The Biltmore House Estate. Sally is survived by her son and daughter-in-law, Brian & Sue Stevens of Centerville, OH. She was preceded in death by her husband, Chuck; her parents; her sister, Donna; and her brother Frank. Services take place on Wednesday, February 21, 2018 at Erlewein Mortuary in Greenfield, IN. Visitation from 4 to 6 p.m. and funeral at 6 p.m. All are welcome to celebrate Sally’s life. In lieu of flowers, please donate to the Hancock County Public Library, 900 W McKenzie Rd, Greenfield, IN 46140 or the Alzheimer’s Association, P.O. Box 96011 Washington, D.C. 20090-6011. Friends may share a memory or a condolence at www.erleweinmortuary.com.

The family of Sally Jean Stevens created this Life Tributes page to make it easy to share your memories.